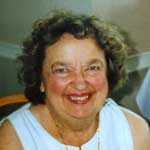 WAKEFIELD — Margaret M. Connors, 85, of Wakefield died on Sunday, June 7, at the EPOCH of Melrose.

Born in Malden on April 26, 1930, she was the daughter of the late William S. and Marguerite (Moynihan) Sullivan.

Her funeral will be held from the McDonald Funeral Home, 19 Yale Ave., Wakefield on Friday at 9 a.m. followed by a funeral Mass in St. Joseph Church, 173 Albion St., Wakefield at 10 a.m.

Visitation for relatives and friends will be held at the Funeral Home on Thursday from 5 to 7 p.m.

Interment will be at Holy Cross Cemetery in Malden.