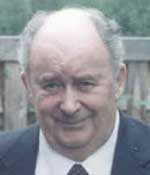 In 1951, Robert received a bachelor of science in Business Administration from Boston College. He began his working career as a CPA with the Charles F. Rittenhouse & Company in Boston, moving on to a new career as a corporate executive at the National Casket Company in Boston, a position he held for 25 years before forming his own consulting company and holding the position of CEO for 10 years.

Robert also contributed to the Salem Evening News as a columnist, authored six books on baseball and politics and was recognized and awarded winning columnist of the year. Robert also held membership with the Mystery Writers of America and the National Writers Association.

In addition to his wife Margaret with whom he shared 39 years of marriage, he is survived by two brothers-in-law and two sisters-in-law, Philip and Mary Rodden of Beverly and Paul Rodden of Chelsea and Elizabeth Smart of Wolfeboro Falls, N.H., and several nieces and nephews.

His family will receive relatives and friends on Thursday, June 11, from 9 to 10:30 a.m. at the Conway, Cahill-Brodeur Funeral Home, 82 Lynn St., Peabody, followed by a Mass of Christian Burial at 11 a.m. at St. Adelaide Church, 708 Lowell St., Peabody.

Burial will be at Greenlawn Cemetery, Salem.