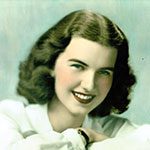 Margaret was born in Malden, one of two children of the late Wendell P. Turner and Margaret R. (Thompson) Turner. Raised in Malden, Margaret graduated from Malden High School, Class of 1939, and from Colby Junior College and the Katherine Gibbs Secretarial School. She married Charles F. Kezer on October 17, 1942 and they lived in Malden before settling in Melrose to raise two children.

Margaret stayed at home to raise her son and daughter, and her husband Charles opened a law practice in Malden. After her children had grown, Margaret began working in the accounting department of her husband’s law practice, and oversaw all client and probate accounting for many years.

Margaret was involved with the Melrose community through her many years as a member of the Phi Theta Xi Sorority. She enjoyed helping organize the annual Theta fair, and used her artistic talents to create hand painted stuffed dolls. She was also a member of the Junior Aid Association at Malden Hospital for many years.

In her free time, Margaret enjoyed taking art classes and especially enjoyed painting beautiful New England seascapes. She enjoyed travelling especially to Caneel Bay in St. John, and Florida during the winter months. She was great cook, but also enjoyed dinners with friends and family at Bellevue Golf Club.

Besides her family, one of her main passions in life was raising collies. She had a particular love for the breed and helped nurture several litters. A member of the New England Collie Club, she bred, raised and showed the dogs for many years.

After moving to Connecticut, Margaret became involved with many activities while living at the Evergreen Woods Retirement Community. She was a member of the resident’s council, hospitality committee, opera/symphony committee, oil painting club, knitting group, while also working at the country store.

A devoted family woman, Margaret was an adoring wife, doting mother and caring grandmother. She enjoyed many years spending time together as a family at their cottage on Bow Lake in Stratham, NH. A good natured person, she provided endless love for her children, and cherished the time she spent with her grandchildren.

Relatives and friends gathered in honor and remembrance of Margaret’s life during visiting hours at the Robinson Funeral Home, 809 Main St., Melrose on Thursday, March 19, from 4 p.m. to 8 p.m., and again on Friday morning for her funeral service celebrated at 11 a.m.

For online tribute or to share a memory, visit RobinsonFuneralHome.com