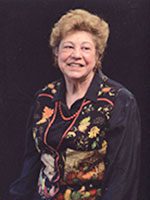 MELROSE — Marion J. (Celani) Gianino, 84, passed away in Melrose on March 16 after suffering from cancer.

She was born on March 19, 1930, the daughter of Frank and Josephine (Genovese) Celani.

Her early childhood was spent in Malden. Then when she was nine years old her family moved to Melrose where she has lived ever since.

She attended the Coolidge Elementary School and graduated from Melrose High School with honors in 1948. During this period she attended the Mass. School of Art on weekends. After graduating from high school she worked for her father in the automobile business as secretary and bookkeeper while also attending the Academy Moderne Modeling School.

In 1954 she married the love of her life, Peter Gianino of Medford, and since Peter was in the Army, she moved with him to Albuquerque, NM, until his discharge one year later. The couple returned to Melrose where they have made their home ever since.

Marion had many talents. She was an accomplished marimba player and performed at local functions. She also had a beautiful soprano voice and, being a member of St. Mary Church, she made use of that voice in their choir in her later years. Both she and Peter were avid ballroom dancers and also enjoyed Greek and Armenian folk dancing.

For many years Marion belonged to a line dance group and they would oftentimes entertain the elderly in local nursing homes. She also enjoyed listening to opera.

However, her greatest attribute was her devotion to her husband and her family, constantly offering her encouragement, inspiration and support. Her dancing and traveling offered ample opportunities to form many friendships which have endured over the years. Of all of Marion’s avocations, travelling fascinated her the most.

Before marriage, her family visited many parts of the U.S. and South America. After marriage she and Peter traveled to many parts of the world. At each country she would buy a doll representative of that region and soon had an extensive doll collection.

For a time, Marion worked as an outside travel agent with such companies as International Weekends, Green St. Travel Co. and My Travel Co. in Melrose. She was an excellent cook and loved to experiment in concocting new dishes.

She loved to tell stories about her fascinating parents, as well as the comical escapades that occurred during her courtship and early marriage years with her husband.

Marion was the loving mother of Dr. Stephen Gianino of Lexington, Peter Gianino of Melrose and Andrea Bryant of Whitefish, Montana. Her siblings were Anthony Celani of Lynnfield and Anita Mobilia of Wakefield. She also had four grandsons, a granddaughter along with many nieces and nephews.

Relatives and friends are respectfully invited.

In Lieu of flowers contributions can be made to Recording for the Blind and Dyslexic, “Learning Ally”, addressed to Learning Ally, Financial Development Dept., 20 Roszel Road, Princeton, NJ 08540.