Published in the September 1, 2016 edition 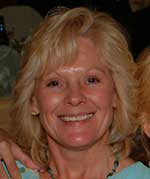 Marie was born on Nov. 28, 1952, the daughter of Margaret Cole and the late Hobart Keith Cole Sr.

Mrs. Cerretani was the wife of Gary Cerretani of Dunnellon.

Marie was raised in Wakefield and graduated from Wakefield High School in the Class of 1970. She met her husband Gary while working in the local restaurant called the Hazelwood. Marie initially worked in the kitchen preparing desserts for the waitresses. Eventually she became a waitress and Gary and his mother ate many meals there trying to get Marie’s attention.

The attraction was mutual and finally on Friday the 13th they had their first date. After dating for a year Gary asked Marie to marry him and she accepted. They were married Jan. 29, 1972 and remained married Marie’s entire life.

They resided in North Reading for 38 years before moving to Dunnellon, Fla., to be closer to their daughter and grandchildren four years ago.

Marie was active in the two churches they attended but was most active in the Melrose First Baptist Church where she helped her husband in preparing dinners and serving hundreds of people food to raise money for the church. Marie also worked on missions in the church and raised many dollars and is still raising money today with her brilliant mind for the outreach committee.

Marie’s favorite past time was being a mother and especially becoming a grandmother. She was a devoted and loving wife and as beautiful on the inside as she was on the outside.

Marie is survived by her husband Gary Cerretani; her mother Margaret Cole; her brothers Hobart Keith Cole Jr. and William Donald Cole and his wife Sandy; her daughter Ingrid Marie Cerretani Merwitz and her husband Daniel; her son Gianni Joseph Cerretani and his wife Kristen; her niece Natasha Cole, nephews Vincent and Jonathan Cole and the love of her life her grandchildren Shaymus Daniel and Alyssa Nicole Merwitz.

A memorial service will be held at 9:30 a.m. on Saturday, Sept. 17, at the First Baptist Church of Melrose, 561 Main St. All are welcome. Additional parking available behind the Melrose Fire Headquarters.