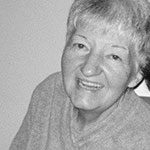 Marion resided in Melrose with her husband, (the late) Roger C. Wilder, for many years and recently moved back to her former hometown of Reading. She was the daughter of the late Bernard S. and Helen (Pedrick) Dickman.

Marion attended elementary school in Reading and graduated from Reading Memorial High School, Class of 1959. From an early age, she was known for her independent spirit, appreciation of nature and love of Boston’s professional sports scene. Following an early stint at the former Reading Savings Bank, Marion worked for a number of years in the facilities office at Emerson College in Boston. She also waitressed at Kitty’s in North Reading and, later, at the legendary Hilltop Restaurant on Route One in Saugus.

Prior to her retirement, Marion was a longtime member of the housekeeping staff at Melrose–Wakefield Hospital, where her kindness, diligence and friendly nature were much appreciated. She volunteered many hours in the hospital’s gift shop and other departments as a member of Melrose-Wakefield Hospital Auxiliary. Marion was a communicant of St. Joseph Church in Wakefield.

Her interests included traveling, vacationing in Europe as a young woman and later, spending vacations with her husband in South America, Aruba and other warm destinations. She treasured her many summers spent with family and friends at Bow Lake in New Hampshire. In addition, Marion was an avid gardener, spending much time outdoors with her perennials, shrubs and vegetable gardens. Neighbors and strangers gathered each spring to admire an extensive slope of creeping phlox, where she had patiently planted and nurtured different colors, in her front yard. She enjoyed dabbling in both old and new cooking recipes and collecting vintage household items. Marion had a great eye for yard sales and was thrifty with her own needs and generous with those of others. She loved her special Melrose neighborhood and the friendship and camaraderie of “Knit, Purl, Pray,” a social ministry gathering at St. Joseph Church.

She was the beloved wife of the late Roger C. Wilder with whom she shared 27 years of marriage. She was the dear sister of Martin P. “Marty” Dickman and his wife Maryann of North Reading and Linda R. Johnson of Lynnwood, Wash. She was the stepmother of Mark Wilder and his wife Betty of Reading, Scott E. Wilder and his husband David Ebert of Westford, and Gregg S. Wilder and his wife Lisa of Strafford, N.H. She was the cherished grandmother of Douglas M. Wilder of Waltham, Linsay R. Kaplan of Portsmouth, N.H., Nathaniel W. Wilder of Chesterfield, N.H. and the late Andrew Wilder. She was the loving great–grandmother of Elijah and Lilah Kaplan of Portsmouth, N.H. and is also survived by nieces and nephews: Jeffrey Coderre of Lowell, James Dickman and Peter Dickman, both of Beverly, Kathryn Dickman of Slatersville, R.I., Stephen Dickman of Woburn and the late Keith Coderre, as well as many other beloved family members.

Relatives and friends gathered in honor and remembrance of Marion’s life during visiting hours at the Robinson Funeral Home, 809 Main St., Melrose on Monday, Feb. 23 and again on Tuesday, Feb. 24 at St. Joseph Church, in Wakefield where her Funeral Mass was celebrated.