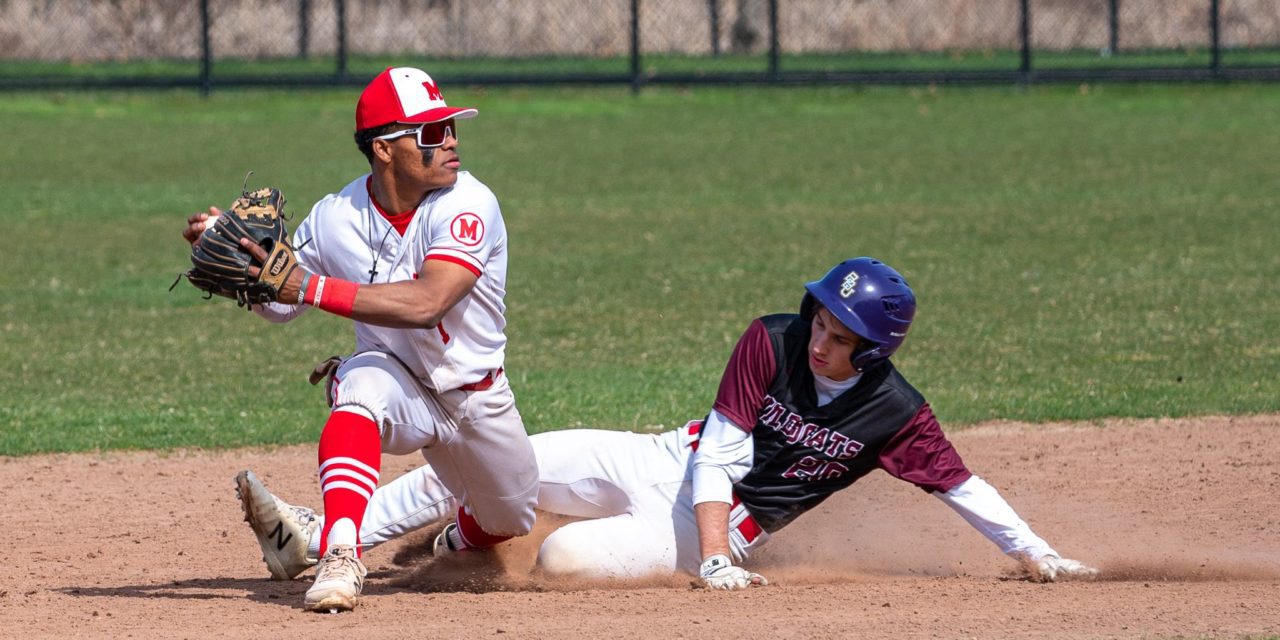 MELROSE- The Melrose High baseball team won under the lights at home over the Matignon High Warriors by a score of 9-0 at Morelli Field and followed that with a big win over the Wakefield Warriors, 11-7, the following day at home at Morrelli Field.

At 9-7, Melrose needs just a win to clinch a spot in the Div. 2 playoff field, and could get that done this week when they travel to Burlington on Thursday or when they host Wilmington on Tuesday.

Against Matignon, it was a cool night at Morelli Field, but the Melrose bats were hot as they jumped out to a quick 1-0 lead in the first inning off of a Rowan Smith single to drive in senior Matthew Whelan. Melrose would go quiet for the next two innings, but Dom Drago kept the Warriors at bay and gave his team plenty of time to get going on offense.

In the third inning, Malcolm Whitfield would single and swipe two bags to put himself in scoring position quickly. Whitfield would toy with the Warriors and the base path and take home after a failed pickoff attempt at third making the game 2-0. Domenic Lamentea would contribute to the inning with a sac fly scoring Rowan Smith making the contest 3-0 after three innings. The fourth inning would prove to be the difference maker for the Red Hawks as they accumulated six of their runs during that stretch. Domenic Lamentea scored two on account of a single to left field, Michael Richards would score off of a Drew Harrington single, and a passed ball by Matignon would allow Melrose to stretch their lead to eight after four innings. The final run of the game would come off of a single from Rowan Smith where he would eventually get into scoring position from a Drew Harrington single. He would cross home off of a wild pitch from the Matignon hurler. The game was marked at 9-0 after six innings.

Matignon would go quietly due to Melrose’s solid defense and Dom Drago delivering a gem for his squad. Drago would hurl all seven innings and accumulate eight strikeouts on the evening.

Melrose picked up an even more impressive win the following day when they hosted rival Wakefield Warriors at home on Tuesday, with an impressive 11-7 victory that saw Wakefield out of contention most of the day. Senior hurler Trevor Botto got the win on the mound, going 6 innings with 6 strikeouts while Melrose knocked out Warrior starter Luke Ickes early. Wakefield would score at the top of the first to make it 1-0, but a collection of hits from Matt Whelan, Malcolm Whitfield and Trevor Botto helped tie i tup. And Whelan would score on a Rowan Smith hit to the outfield and a fielders’ choice scored Whitfield to make it 2-1 at the end of the first. Wakefield would threaten in the second with a couple men on, but Melrose senior catcher Mike Richard threw out a stolen runner at second to end the inning. In the third and fourth, both teams were super charged at the plate, none more so than senior Mike Richards who hit a monster homer over the center field fence that made an appearance on the Fred Green Football field. That would give Melrose a 3-1 lead and a Dom Lamentea single to score Ben Cassavoy made it 4-1. Wakefield battled back admirably in the fourth but capitalized on Melrose infield errors to narrow the game 4-3, advantage Melrose. Botto would strike out the last two batters to end the inning.

Melrose bats continued to stay hot and they took a large 8-3 lead thanks to a two-run double by Rowan Smith to score Whitfield and Whelan. Melrose was adept at base running and stole frequently over the night which helped put runners in position for a Rob Colozzo double that made it 8-3. A hit and steals from Trevor Botto put him in the position to make it a 9-3 game in the 5th when he capitalized on a pass ball at the plate. Matt Whelan could cause more damage with an RBI single to score Lamantea. The final point for Melrose was a forced run at home on a hit batter that scored Drew Harrington for Melrose’s 11th run.

Reliever Ben Cassavoy came into the game in the final frame and Melrose collected an eventual 11-7 win.

Melrose only needs one win to enter a post season and can do that when they travel to Burlington on Thursday or play Wilmington at home on Tuesday at 4:15 p.m.