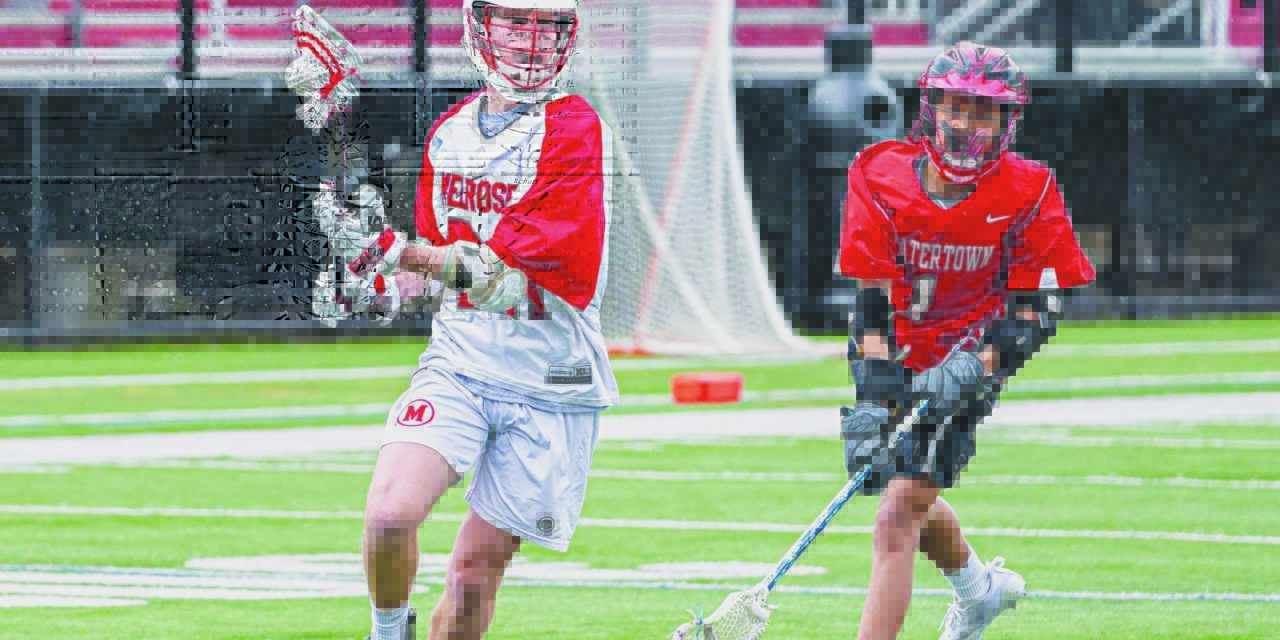 STEVEN FOGARTY’S overtime goal was all Melrose needed to take down a mega-talented Winchester team, 8-7. (photo by Raj Das edphotos.com)

MELROSE—The Melrose High boy’s lacrosse team remains 5-6 on the season and picked up a key league win over an old rival, Winchester, in an impressive 8-7 overtime victory thanks to a winning goal by junior Steven Fogarty to lift Melrose over a red-hot Winchester team.

Fogarty helped opened the game with a goal that allowed Melrose take an early 2-1 lead, coming off a first-strike goal by Melrose senior captain Liam Maher (2 goals). From there, Melrose would not lose the lead and benefitted by a hat trick from senior captain Shea Fogarty to give Melrose comfortable leads of 4-2 and 6-4.

Winchester had forced overtime with 59 seconds left with a goal just past the capable hands of Melrose goalie Michael Fuccione. But upon whistle after regulation Melrose was in full control and saw senior TJ Sullivan connect with Steven Fogarty on a beautiful pass just minutes in that allowed Fogarty to fire above the gloves of the Winchester Red and Black’s goalie.

It was a categorically crisp game for Melrose who showed a quality defense across the board. And the win came at the right time for Melrose, who sports a rather deceptive 5-6 record. Most of their 11 games have come at the hands of tough, non-league opponents and Div. 1 competition. Given their strength of schedule, Melrose enjoys a fairly high #19 seed in current power rankings in the Div. 2 field. Expect that number to rise, as Melrose continues the crux of their Freedom League play and embarks in the final 6-game stretch of the season. With some additional wins, Melrose looks to be in the drivers’ seat for a post season appearance, which is a now staple for the club.

Melrose celebrated Senior Night this past Wednesday at home against Arlington and will host Burlington on Thursday (post deadline) in an effort to collect more wins. Next week they will do some traveling to Wilmington and Stoneham. Stay tuned.