Melrose C team gets the better of Wakefield Townies

Prevails by a 9-8 score in LTA contest 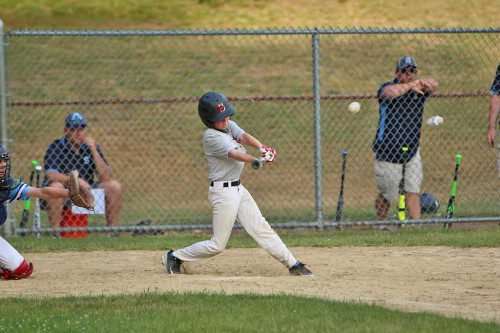 LUKE FITZGERALD had a hit and scored a run as the Wakefield Townies C team came up short against Melrose by a 9-8 score last night in a Lou Tompkins All Star Baseball League game at Sullivan Park. (Donna Larsson File Photo)

WAKEFIELD — Sullivan Park was the site on Tuesday evening where the Lou Tompkins All-Star Baseball League’s C Division teams from Wakefield and Melrose faced off.

Wakefield came in having lost nine straight, while Melrose was looking to right the ship following a 9-0 shutout loss to Sudbury on Sunday.

In the end, Melrose prevailed by a 9-8 score.

It was one of the closest games of the year with Wakefield jumping out to a 3-0 lead after the first inning. Melrose went on to score two runs in the second inning and five runs in the fourth inning to take a 7-3 lead.

Wakefield did all it could to rally and plated three runs and had two runners in scoring position when the final out was made, securing Melrose’s fourth win of the season by a 9-8 final score.

Luke Hopkins got the start on the mound for the Townies and he was opposed by Colby Moss for Melrose.  Moss tossed the first four innings allowing four runs, and striking out one to claim the win.

Tom Bergin came in for Moss in relief, picking up the three-inning save.

After Hopkins retired Melrose in order to start the game, Luke Fitzgerald led off the bottom of the first with a double. After Chris Powers walked, Paul Holman struck out for the first out. Mike Iannuzzi walked to load the bases for Jack Ryan who knocked in a pair of runs with a two-RBI single. Iannuzzi scored as well to make it 3-0 after one inning.

Jack Jaggers led the top of the second off with a triple for Melrose. He scored from third, as did another run afterward as the result of three straight walks.

Wakefield was kept off the board in the second and third while Melrose failed to score in its half of the third. In the top of the fourth Bergin reached on an error and came around to score on an RBI single by Charlie Haggerty. It was the start of a five run inning on two hits and with the help of two defensive errors, four walks and a hit batter.

Moss got the Townies to go quietly in the fourth after hitting the first batter.

Melrose went down in order in the top of the fifth with Hopkins recording one of his four strikeouts on the evening.

Melrose generated a threat without virtue of a hit in the top of the sixth but ultimately failed to score. A one out walk, stolen base and wild pitch saw Moss move up to third base with one out. Two straight walks loaded the bases but Hopkins struck out the final batter looking to end the threat.

Hopkins worked a one out walk in the bottom of the sixth and came around to score on a Harry Cleversey RBI infield single. That was all the scoring Wakefield would manage in the sixth and trailed 7-5 heading into the final inning.

After a pop out to short to lead off the seventh, a one out error followed by a walk and a two-RBI single gave Melrose the insurance it needed. Wakefield ended the half inning in style with a double play on a fly ball to center and a strong throw to nail the runner heading back to first.

A single by Powers led off the home half of the seventh and then a one out walk and a two out walk led to a double by Howie Melanson that score two. An RBI single by Matt Clark followed and Wakefield was down just one run at 9-8. With the winning run on second base, a ground out to shortstop ended the game.

Jack Jaggers had an outstanding game for Melrose with a pair of extra base hits, a couple of RBI and the defensive play of the game with two outs in the fifth. Mike Iannuzzi hit a shot back up the middle for Wakefield. It was probably the hardest hit ball of the game for the Townies, unfortunately it reached Jaggers on two hops in center field. Jaggers came up throwing and a strong, accurate toss to first base got Iannauzzi by a half step.

“We’ve been working on that all year,” Melrose manager Scott Moss said of the throw after the game, “Defensively we’ve been waiting for it. We’ve been struggling a little defensively and the team turned it around today.”

Wakefield’s struggles have seen it fall to the bottom of the division with a 1-10 record. Their previous five games they had lost by the mercy rule, so this was a welcomed improvement for Manager Mike Powers to see.

“It’s been a big change from every game but the first,” Powers said after the game. “Everyone was kind of more into the game because we were closer. We just hung in there. I’m glad we came back and fought back.”

Melrose on the other hand, has put themselves back into the playoff race. Scott Moss’ team claimed its fourth win of the season, moving up to third in the East standings at 4-8.

“It was a well fought battle between the two rival neighbors,” Moss said of Melrose’s win. Melrose will look to keep the quality play going when it heads to Medford on Friday for its next game.

Wakefield is back on the field on Thursday as it also hits the road to take on Winchester.