Boys hockey pulls away from Wilmington, 4-3

SAUGUS—In a thrilling back-and-forth contest at Kasabuski Rink on Saturday, Dec. 23, the Melrose High boys’ hockey team was able to pull away in the third period from league rival Wilmington for a 4-3 win.

With 5:31 left in the third period, Wilmington’s Ryan Barrett sped past multiple Melrose defenders on a fast break en route to putting one by Melrose goaltender Mark Dewling, evening the game at 3 apiece.

Just fifteen seconds later, Melrose forward Cam Marks answered with a goal of his own from the right wing, and the Red Raiders never relinquished the lead from there. A late penalty by the Wildcats left them short-handed in the final minute of play, effectively sealing the deal. 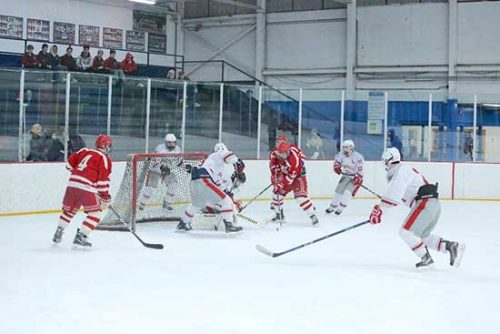 The Melrose Red Raider hockey team earned their third win with a victory over Wilmington on Dec. 22.

“I think our mindset is to get back to what we do best: we’re very fundamentally sound,” said Melrose head coach Vin Mirasolo on closing out the game after the Marks goal. “So just trying to stress being on the right side of the puck, getting pucks in deep, make sure we have support in all three zones, and just use the clock to our advantage, get pucks in deep and force them to come 200 feet.”

Sophomore forward Brendan Fennell kickstarted the scoring for Melrose, punching in a loose puck right in front of the goal to tie the game at 1-1. The score remained that way through the first period. Shortly into the second, Wilmington’s Joe Hill capitalized on a breakaway opportunity to recapture the lead for the Wildcats. Melrose defenseman Liam Crovo responded right back, slapping one past the Wilmington goaltender from far out on the left wing.

“Those guys don’t score much, but when they score it gets us really going. It brings us together as a team,” said Brendan Fennell of Crovo’s goal.

“It’s definitely a help…it certainly takes a little pressure off our forwards and helps spread the wealth around,” added senior Pat Maher.

After the Crovo goal, several power play opportunities presented themselves, but neither team was able to take advantage, and the score stayed knotted up going into the third.

For once, it was Melrose who struck first in the third on a goal by sophomore Quinn McCarthy, and it was Wilmington who had to play catch-up. Marks’ goal a little over a minute later made him the fourth different Red Raider on the day to find the back of the net.

“It’s a long game, and we can’t get too high, and we can’t get too low,” said Mirasolo of the key to pulling ahead in tight contests. “And I think today was a perfect example of that…I think we try to be even-keeled, and quite frankly we didn’t do a great job of that the whole game, but we’re maturing and getting better with that.”

As for where the Red Raiders can improve going forward after the holidays, “I think we need to keep the intensity going the first two periods,” noted Maher. “Can’t keep relying on the third period to get chances, and [we have to] just play better defense overall.”