Fight to the finish for girls’ soccer 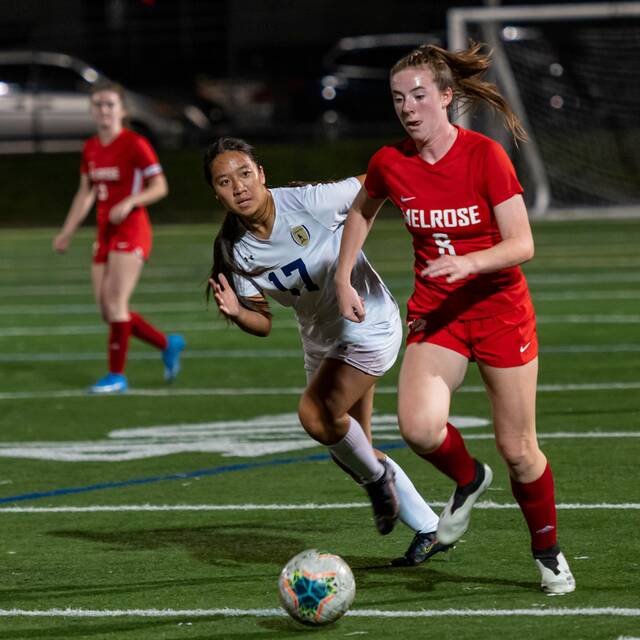 MELROSE—At 4-9-3, the Melrose High girls’ soccer team is winding down their season with hopes of securing a spot in the Div. 2 post season.

In most recent action, Melrose fell in back-to-back games against Wakefield and Marblehead, which puts emphasies on their remaining game against Burlington on Wednesday and Wilmington this Thursday (post deadline).

With the new playoff qualification system going into effect this season, Melrose is technically still in playoff contention. The top 32 of any division (even those under a .500 winning percentage) can qualify based in part on a strength of schedule rating. In Melrose’s case, they hope that becomes a factor for them. In the most recent seedings on Oct. 25 they were seeded #36.

“At this point we’re on the outside looking in, but could turn it around with wins this week,” says Melrose head coach Rob Mahoney.

Mahoney said of the effort, “Wakefield played very well, and we didn’t come out from the opening whistle ready to play. Credit to our players for continuing to fight to the end and not giving up.”

One setback for Melrose has been the injury to their sophomore starting goalie Ava Tormo, who sustained an injury on October 18 during Melrose’s game against Stoneham. In her absense, keeper Erin Regan has stepped in at the net. “We are hopeful Ava will be back if we qualify for the tournament,” says Mahoney. “In the meantime, Erin has stepped up and done a great job. Stepping in towards the end of the season as a freshman is incredibly difficult, even for a field player, and even more so as a goalie.”

Senior captain Jenna Maguire is currently Melrose’s leading scorer with 6 goals and 2 assists. Freshman Chloe Mahoney has 5 goals and 1 assist, and Shelagh Downes has 4 goals. Melrose defense has done an admirable job all season but with Tormo missing at the net, Melrose will need to double down to finish on a winning note. Says Mahoney, “In the past few games, we’ve had some uncharacteristic defensive lapses that have led to goals for the other team. We are focusing on everyone doing their job well, and working as a unit defensively to limit the opposition’s chances in front of our goal.”

That wasn’t the case against Watertown, who Melrose beat 3-1 on Oct. 20. Melrose took an early 1-0 lead in the first ten minutes, controlling play the entire first half, and went into halftime with a 1-0 lead. Watertown scored partway through the second half on a nice shot to tie it up, and then Melrose’s Emily Lucien scored a left footed goal with 15 minutes left to put Melrose up 2-1. With 5 minutes to go, Melrose’s Kailey Donovan sent in a cross that teammate Lily Nolan headed in to make it 3-1.

“The goals by Emily and Lily were their first varsity goals, and the assist by Kailey was also her first varsity point,” Mahoney said after the game.

Now, with the clock ticking on the season, Melrose is hoping to extend their season any way they can.

“This season has been much different than last year’s COVID-impacted season, and I’m proud of the players for their dedication and commitment,” says Mahoney. “We’re focusing primarily on competing and giving it our all. We know we are just as talented as any team we go up against, and we need to show the desire and heart to fight for the full 80 minutes when we step onto the field.”