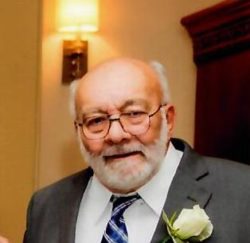 NORTH READING — David Powers of North Reading, formerly of Reading, passed away peacefully at his son’s home in Boxford, Mass. on December 31, 2021. He was 84 years old. David was born in Melrose on August 25, 1937, the son of the late Evelyn (Milano) Lerch and her husband Herman.

David was educated in Melrose and was a graduate of Melrose High School. He attended and graduated from Boston College and received his Master’s in Education from Salem State College. Known for his athletic ability, in high school he was a standout pitcher. He was known for his knuckle ball and pitched the longest played high school baseball game in 1955 – 20 innings, beating Reading High School. David was well known for his artistic ability as well.

David was an educator in the North Reading Public Schools for 33 years. He served as Principal at the Murphy School and the E. Ethel Little School. He also served as Director of Pupil Personnel and Special Education.

David proudly served his country in the U.S. Army.

A private funeral Mass will be celebrated at St. Mary’s of the Annunciation Church in Melrose. There are no visiting hours and burial is private.

In lieu of flowers contributions may be made in David’s memory to the Veterans Honor Flight, P.O. Box 16287, Hooksett, NH 03106 or to the Special Olympics of Massachusetts, 512 Forest St., Marlborough MA 01752.

Arrangements are under the direction of the Douglass, Edgerley and Bessom Funeral Home, Reading. To leave an online message of condolence, visit www.johnbdouglassfuneralhome.com.