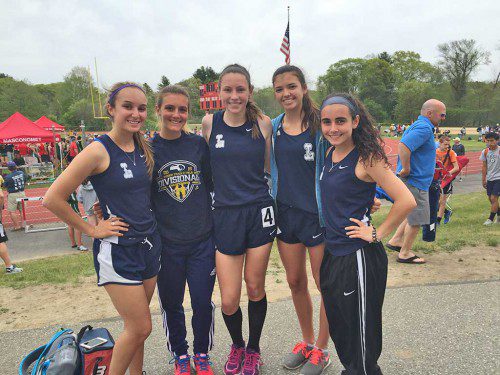 BOXFORD — Kate Mitchell earned the Cape Ann League championship title in the 800-meter race by completing it in 2:20.38 at the CAL Track and Field Championships.

The sophomore topped all competitors in a field of 16 runners May 21 at Masconomet Regional to take the top spot and earn 10 points for her team. Her time was nearly five seconds faster than her closest competitor, a sophomore from North Reading, Olivia Esposito (2:25.42).

Not to be outdone, the 4×400 team of Juliana Passatempo, Lexi Yannone, Renee DelNegro and Kate Mitchell finished in sixth place overall in 4:31.99.

Several other great performances were posted by various members of the team.

Sophomore Juliana Passatempo placed seventh overall in the 400m hurdles in a time of 1:12.71.

Senior Erica Richard cleared 7 feet in the pole vault for 11th place overall. The event was won by Julia Valenti (11’ 7”) of North Reading.

Senior Kaitlin Flannery ran the 100m race with a time of 14.3 seconds to place 20th overall.

Personal records achieved at a recent JV meet included Aja Parker, who finished the 100m hurdles in 18.6 seconds; Mia Ford, who competed in the high jump for the first time and cleared 4’2″; and Kylie Patten, who improved upon her past performance in the triple jump by one foot, Cook said.

Also having a stellar day were Gabriella Passatempo who had a personal record in the 200m; Elana Kotler, who bettered her time in the 400 hurdles by five seconds; Julia Boriello, who had a five-second PR in the mile; and Mia DeGeorge and Barbara Dickey, who both posted PR’s in the discus, added Cook.

Several notable performances were achieved by the Lady Pioneers at the annual Freshman-Sophomore Meet.

Three relay teams placed in the top six at the meet, Cook said.

Individuals who placed in the top six were: Mia DeGeorge, third in shot put and sixth in discus; Julianna Passatempo, fourth in 400 hurdles; Emily Dickey, fifth in shot put; and Sarah Crockett, sixth in high jump.