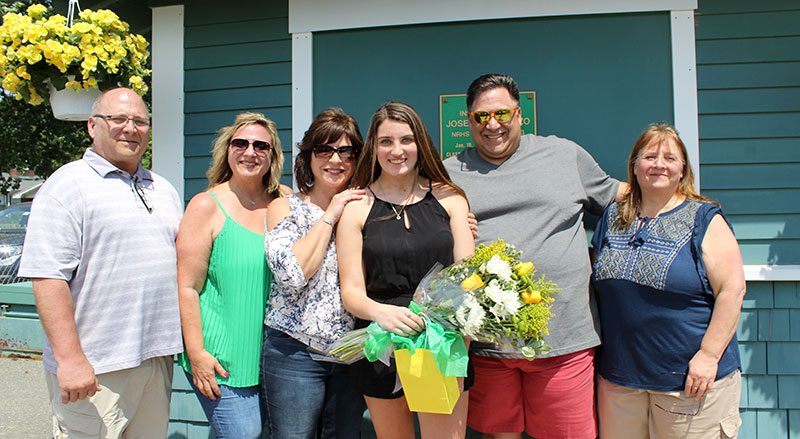 NORTH READING — Gloria Mastro wore many hats throughout her 88 years — wife, mother of five, grandmother, nurse, consummate volunteer in nearly every civic organization or team sport in town as well as her church. You wanted Gloria on your team because she was a doer. She knew how to get things done. And she knew how to convince others to join her team to get the things done that well, needed to be done!

And if you were a little bit reluctant to support a cause she was passionate about (and there were many), she had the ability to convince you to join that cause — with a little treat, maybe a plate of cookies or brownies. She even had a knack for knowing that a cup of black coffee on a chilly April morning was just the pick-me-up that Coach Frank Carey needed while pacing the diamond, rallying his troops.

Decades before there was a facility at North Reading High School known as “Carey Park” there was Gloria arriving to the field in her station wagon, filled with coffee and doughnuts and candies and tonics and a little wooden cash register drawer to hold the spare change and wrinkled bills that funded the legacy that would come to pass, thanks, in part, to the foresight of the many mothers of the players who came to the field to support their children’s aspirations on the baseball diamond while their younger ones played on the sidelines, dreaming of the day it would be their turn to play baseball or any other Hornet sport. Those aspirations were supported by an organization that would become the North Reading Athletic Boosters, helping to fill in the gaps an ordinary school budget could not fund and to support the Athletic Awards Nights of thousands of athletes who wore the Green and Gold. And, in time, to support the championship celebrations as well.

And so it was a fitting tribute on a bright, sunny afternoon over 100 people representing many generations of athletes and fans gathered at Carey Park for the unveiling of a plaque renaming the snack shack as the “Gloria Mastro Concession Stand.”

The inscription on the plaque, which is shaped like home plate, with a portrait of Gloria at the point, reads:

The impact that Gloria Mastro had on so many people and our athletic community during her time on earth was truly inspirational.

“There will never be another like her,” said Coach Frank Carey.

The North Reading Diamond Club requests that you do a random act of kindness in Gloria’s memory.

But the day wasn’t just about unveiling this plaque in Gloria’s memory. It was also an opportunity for the North Reading Diamond Club to award three scholarships and the Mastro family to award a fourth scholarship to North Reading High School students who have distinguished themselves in the classroom, within their communities and on the field.

For over 40 years, Coach Carey and the North Reading High School baseball alumni, who comprise the Diamond Club, have gathered every Memorial Day to play in an alumni baseball game, honor the recipient of the Robert Hunt Memorial Scholarship and raise funds for the next year’s scholarship. This scholarship is named for a young man who died far too young in a tragic traffic accident just five years after winning a State Championship title as a member of the 1969 Hornet baseball team.

This year, that alumni game was rained out, which was a rare occurrence, according to Carey. “It was only the third time in over 40 years that we had to reschedule the (alumni) game. We didn’t get enough players so we decided to go with the second part of the program to dedicate the concession stand to Gloria Mastro.”

The Diamond Club, he said, had voted unanimously to make this dedication in her honor.

Carey recalled how she’d pull up her old station wagon onto the field during those Saturday morning games and when he came out of the locker room she would hand him a cup of black coffee. “That is how our Athletic Boosters began. It began with a couple of women who were dedicated enough to the athletic program to try to raise $5 here, $10 there” to support the programs.

This was also a day to remember Robert “Bobby” Hunt and the scholarship given in his memory. “Bobby Hunt was a member of our 1969 state championship team. He was a dedicated player and had a passion for baseball, and he was a great kid and had a terrific family,” Carey recalled, choking up when recalling the tragic accident that took his life in 1974 after that team had won the state championship title in Division 1.

Carey introduced his successor, current Hornet baseball coach Eric Archambault, who told those gathered that “it was a privilege to take over for Frank after he retired.”

“Robert Hunt was the third baseman and a co-captain of the 1969 North Reading High School Class C State Championship team. Bobby led by example with an extraordinary work ethic. If he felt a teammate was out of line all it took was ‘the look’” to bring that player back into line!

“The recipient of this year’s Robert Hunt Memorial Scholarship also epitomizes the all-around baseball player — someone who excels both in the classroom and in the community, someone of true character and a team co-captain. There wasn’t a single person who didn’t have glowing things to say about this individual. This particular student-athlete is leaving the school and the baseball program a better place than he found it. This year’s Robert Hunt Memorial Scholarship award goes to JoJo Giacalone,” Archambault said.

For the past four years, the Diamond Club has been awarding a scholarship in memory of another alum, Todd Verdonck, ‘92.

“Todd Verdonck’s passion for baseball started early as a pitcher for the North Reading Little League. He played for NRHS between 1989 and 1992 and received the Most Valuable Player Award in his senior year and led the team to a Cape Ann League championship. His talent and drive took him to St. Anselm’s College where he continued his pitching career. Many people in this crowd, myself included, were fortunate enough to know Todd on personal level. Todd was best known for his sense of humor; keeping things light and making everyone laugh,” Archambault told the crowd.

“Coming full circle, he coached youth sports, including North Reading Little League for his son Cole, before he passed. A lifelong resident, Todd loved North Reading and would be happy and proud to know that he was helping a North Reading athlete further their education,” the coach added.

“The recipient of this award has been extremely hard-working for all four years of high school. This player has been a tremendous leader on our team and proven to be mature well beyond his years. He has a very bright future in front of him. I feel very fortunate that I have coached him,” Archambault said. “This year, I present the fourth annual Todd Verdonck Scholarship Award to Frank Cassarino,” he said.

Carey also introduced North Reading Diamond Club President Chris Hanson, who he said is “doing a terrific job.” He also praised him for his leadership in introducing the Challenger League to town to ensure that children of all developmental levels have an opportunity to play baseball.

“I am super proud to have this day to dedicate a scholarship in the name of Gloria Mastro,” Hanson said.

“Gloria just gave everything, from her time and commitment to the community, to the school and the baseball community. She obviously instilled strong values. She’s got a great family. Anybody that knows the Mastros knows that you like them and you respect them,” Hanson said, adding, “I grew up with John. John is the type of guy where if you are stuck somewhere two hours away, give him a call and he’ll say, ‘I’ll be there.’ I knew I could get him too because he had a cell phone the size of suitcase! His second one was probably the size of a toaster oven.” Many in the audience nodded in agreement

“As it relates to the scholarship, the Diamond Club has selected a person who is of high character. This person is a graduating senior; he is going to go off to advance his career at St. Joseph College in Maine. I know he is going to do great on and off the field, and that’s Michael Vittozzi.”

Gloria’s five children, Peter, Anne, Paula, Andrea and John, then stepped forward to award the scholarship they were giving to a fourth NRHS senior in memory of their mom and to speak about their mother.

John Mastro read the words of remembrance on behalf of his family. “Thank you all for coming today. On behalf of our mother Gloria Mastro and our family we are very honored that she has been recognized for the dedication she put into North Reading Baseball.

“Coach Frank Carey and North Reading Baseball have been dear to her heart since the early ‘70s.

“We find it so is fitting to celebrate Gloria today as we remember all of the games that she pull up at this field across the grass next to the home bleachers to open up the tailgate of her station wagon with candy, Drake’s Cakes and sodas for sale.

“As a kid if you were lucky enough to be picked to climb up and man the old scoreboard, it was a great day as Coach would treat you to the snack of your choice after.

“The best game of the year was always the excitement of the Memorial Day Alumni game. Seeing returning players, honoring the Hunt family, Kathy passing the helmet, and the buzz of North Reading center during the Memorial Day parade and the annual Rotary Chicken BBQ. It’s amazing that after 40-plus years, the efforts and traditions have held this alumni group together.

“Our baseball experience holds many great memories and lifelong friends. Our family was so happy to be a part of the early efforts and ideas with the forming of North Reading Diamond Club and the building of the snack bar.

“Our heartfelt thanks to all for honoring Gloria, especially Coach Carey and Marco Vittozzi for choosing to honor mom with a beautiful dedication and plaque.

“In closing, today we celebrate a great woman, a great tradition, and honor some deserving young people that have made a difference.

“Right now we would like to announce the recipient of the Gloria Mastro Scholarship Award, awarded to a student representing community service as well as pursuing a career in the medical field. This year’s student recipient is Jillian Wallace, who will be pursuing a career in nursing and will be attending Rivier College in the fall. Congratulations, Jillian!” 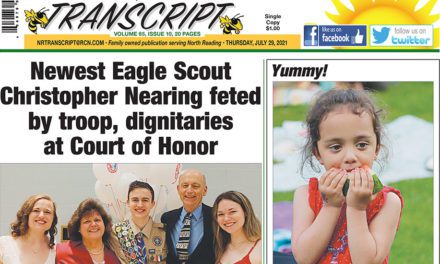 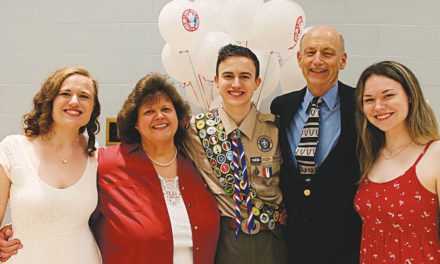