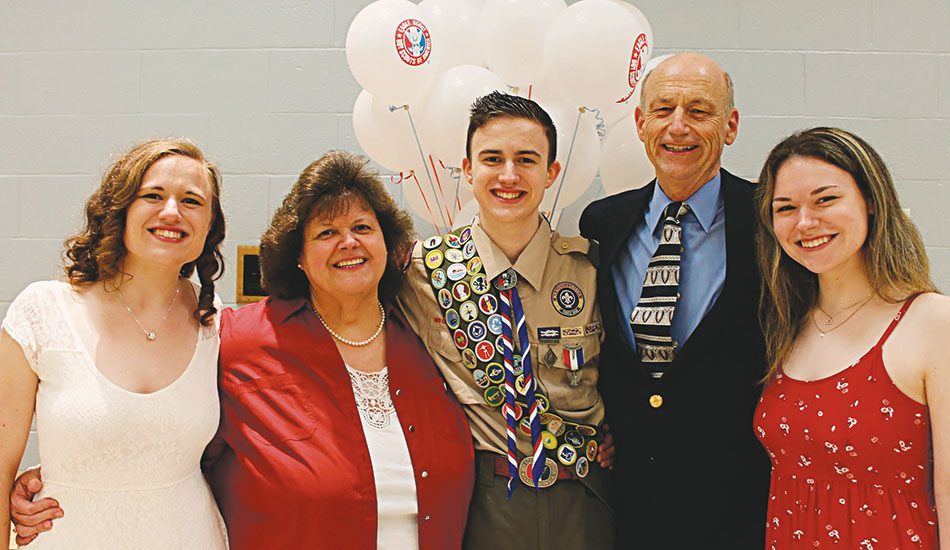 NORTH READING — The journey to attain the rank of Eagle Scout, the highest honor a youth can attain in scouting, is one of perseverance in the stages of growth necessary to develop lifelong leadership skills and a commitment to service to one’s community.

Boy Scout Troop 750’s newest Eagle, Christopher Nearing, can now include additional leadership skills on his trail to Eagle – that of patience and delayed gratification – compliments of COVID-19!

Now a rising sophomore at University of Rhode Island where he has taken on the challenge of a double major in microbiology and animal science leading to a potential career as either a veterinarian or a microbiologist, COVID delayed Nearing’s Court of Honor by nearly two years. He had completed his Eagle project in the fall of his senior year at NRHS in 2019. 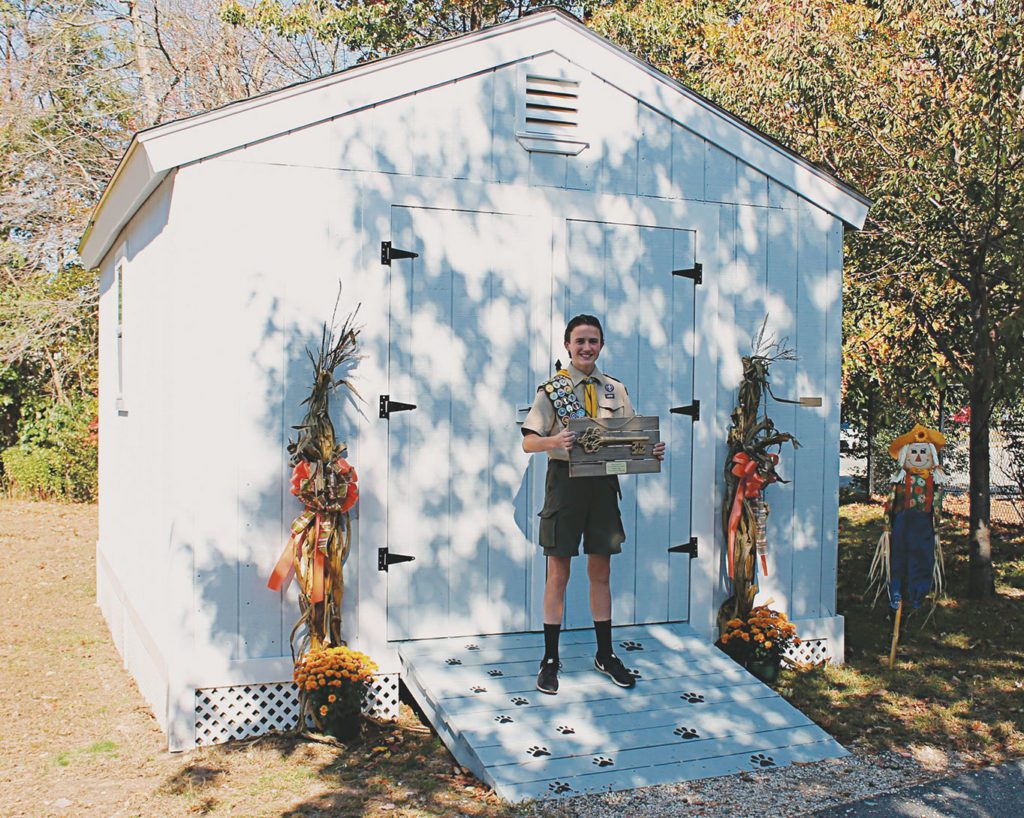 FOR HIS EAGLE project, Christopher Nearing researched, planned, implemented and supervised the building of a 12 ft. by 16ft wooden shed with ramp at the Hood School to store gasoline powered equipment and student sports equipment. (Courtesy Photo)

The recognition of his achievement was celebrated on July 18 at St. Theresa Parish Hall, attended by over 70 guests and dignitaries, including 10 other Eagle Scouts who had attained this honor as far back as 1965.

For his Eagle project, Nearing spent the summer of 2019 researching, planning, implementing and supervising the building of a wooden shed that measures 12 feet by 16 feet, with a ramp, for the J. Turner Hood Elementary School. He selected this project after meeting with then-Superintendent Jon Bernard and current Principal Dr. Glen McKay “to house outdoor lawn equipment and snowblowers that were being stored inside the school,” Nearing wrote for his Board of Review, explaining, “There was a need for having this shed because it created more room for the students, it created an outdoor location to store this equipment, and it removed a safety hazard of having gas fumes being around children. The shed is accessible to the janitors, students and faculty. The students can easily retrieve sports equipment that they use during recess.”

The school had wanted such a shed for over a decade, he noted, and Nearing raised $3,500 by organizing two fundraisers and also securing a donation from the Hood School Parents Association in order to purchase “good quality materials” to ensure it would last for many years to come. Its ramp is even adorned with paw prints representing the school’s mascot, the Hood School Hound Dog.

In pre-COVID days, a ribbon cutting ceremony was held in October of 2019 attended by the entire student body during which McKay explained to the students what it meant to be an Eagle Scout and the positive impact the new shed had on their school.

The ceremony was highlighted by a slideshow featuring several stages of the shed-building process and a Q&A session with Nearing about scouting and leadership. The students sang songs in his honor and presented him with a large “wooden key” inscribed with the school’s motto: “Be Prepared Do A Good Turn Daily.” The entire student body then attended the ribbon cutting and each student shook his hand to show their appreciation. 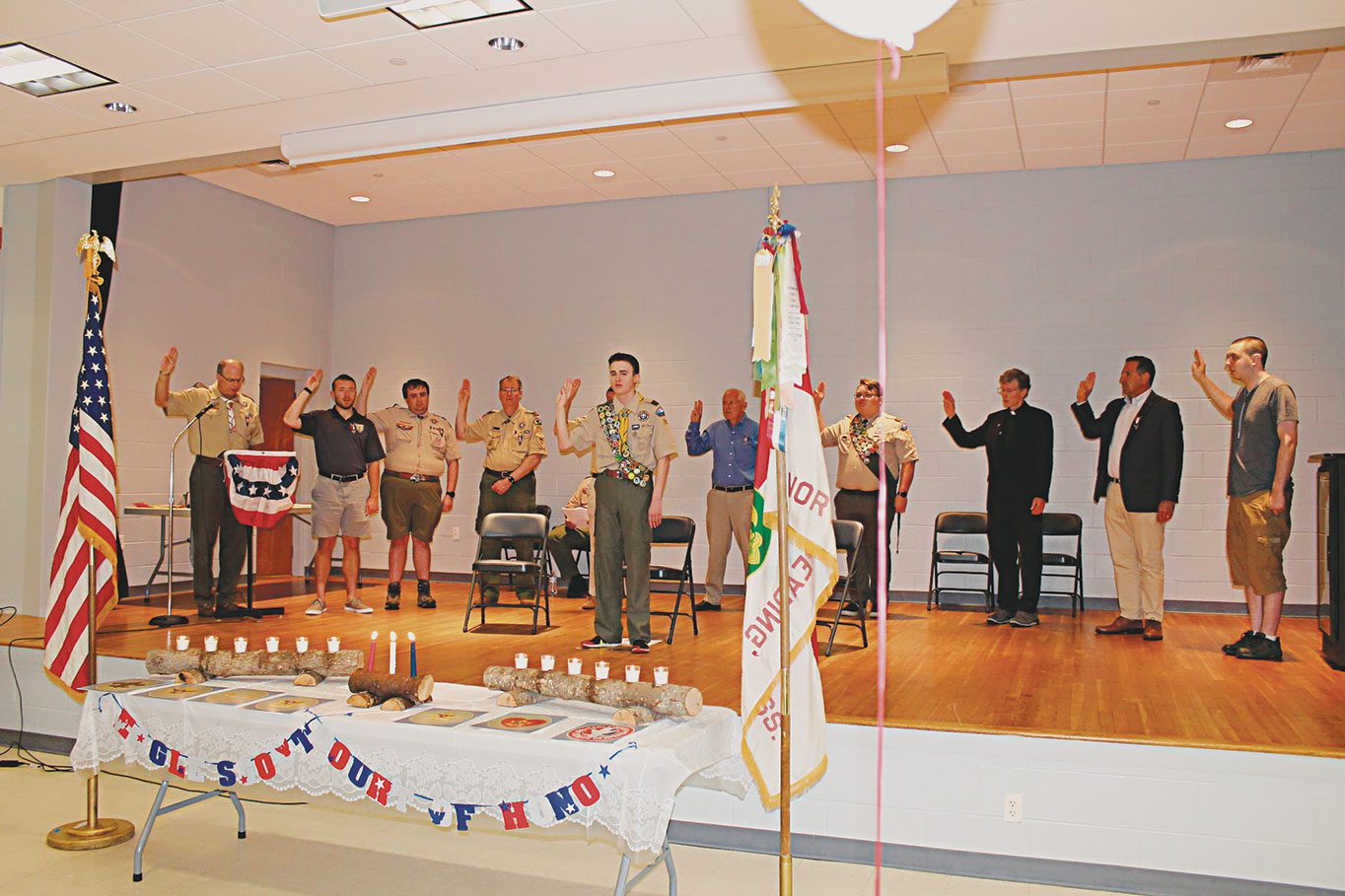 Eagle Scouts must attain a minimum of 21 merit badges in addition to numerous other demonstrations of leadership throughout their time in scouting, all completed prior to their 18th birthday. Nearing earned an additional 20 merit badges over that minimum threshold for a total of 41. This earned him a Silver and a Bronze Palm, the equivalency of four Palms. They also must serving a minimum of six months in a leadership position in addition to their final service project.

Of all these merit badges, his most memorable was earning the Lifesaving badge which requires the scout to swim one-quarter mile in water over 10 feet deep then retrieving a 10lb. weight, both feet first and head first, and lastly, “rescuing” a live person presumed to be drowning who must be brought safely back to shore.

There was no shortage of accolades expressed to Nearing from many members of the community, locally, statewide and nationally.

Current Superintendent of Schools Dr. Patrick Daly, himself an Eagle Scout, noted that only eight percent of all scouts earn this award which puts Nearing in the company of the likes of Neil Armstrong, Steven Spielberg and Pres. Gerald Ford.

“It is so uplifting in challenging times to think of the many great and generous people in our town and school community who contribute so much and make a lasting impact for the future. Those young men, and since 2019, young women, who work to complete their Eagle Scout projects on their way to the path of the Eagle Scout rank are among the very best of the best in our community,” he said.

Daly added, “In my time in North Reading I have witnessed scouts whose projects have positively impacted our community. The young people have met with school officials, proposed their ideas, taken feedback and made adjustments, developed plans, organized the staffing, coordinated with school personnel, created budgets, and overseen the project to completion. These skills are invaluable for anyone entering the ‘real world’ and the experience of this service project provides a true blueprint for success throughout their lives.”

He stated that Nearing’s project was one such blueprint for success. “This was a much needed addition to our school grounds and has been such a welcome addition for our buildings and grounds crew as well as Dr. McKay and the school administration. This building is not only functional but also aesthetically pleasing, as its placement on the grounds is accessible and there may even be a few hound dog footprints artistically placed on the ramps!” he said.

Retired Superintendent Jon Bernard sent a letter of congratulations to Nearing. “I am very proud of you, Chris, and it has been a pleasure getting to know you over the past several years when you were a student in the North Reading Public Schools during my time as Principal at North Reading High School and as Superintendent of Schools,” Bernard wrote. “Your positive and friendly demeanor, talents as a student-athlete and musician, and your willingness to always do good things for the benefit of others are the things that I will always remember about you, Chris. I am pleased to hear that you are doing well at college–I am not at all surprised–given your willingness and desire to do your very best work in all that you do. It is my opinion that this quality is likely the one thing that contributed the most to your having attained the rank of Eagle Scout.”

At the Court of Honor, Nearing personally received a citation from state Sen. Bruce Tarr. He was also presented a citation from state Rep. Bradley Jones Jr., presented by district aide Michele Pacillo. Select Board Chair Kathryn Manupelli and Vice Chair Liane Gonzalez delivered a commendation from the town. And Gail Tenney, Unit Commissioner of the Flintlock District in the Spirit of Adventure Council delivered a commendation and also announced that a scholarship in Nearing’s name has been given to a deserving scout in the local council to ensure the scout can attend a Spirit of Adventure camping experience to help extend that scout’s journey to Eagle.

Nearing is the son of Bruce and Debbie Nearing and the younger brother of Caitlin and Emily Nearing.