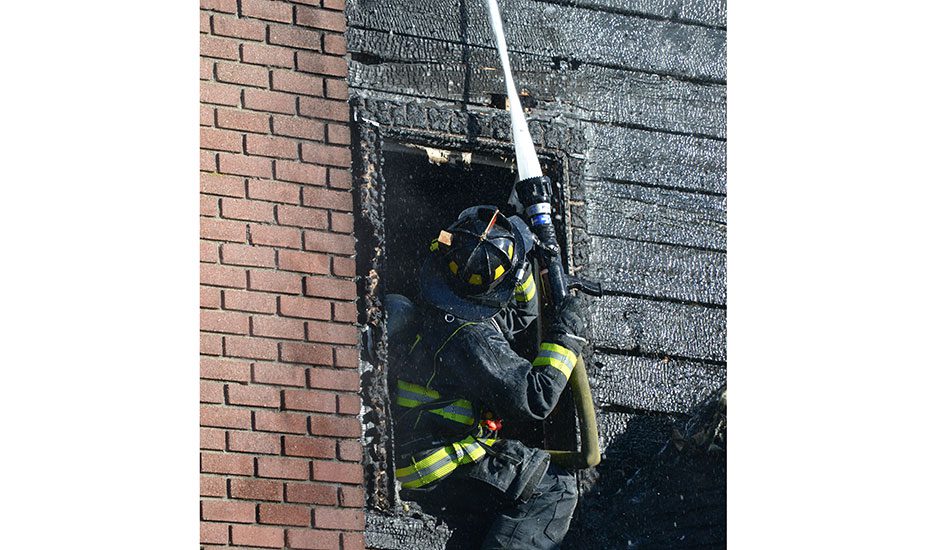 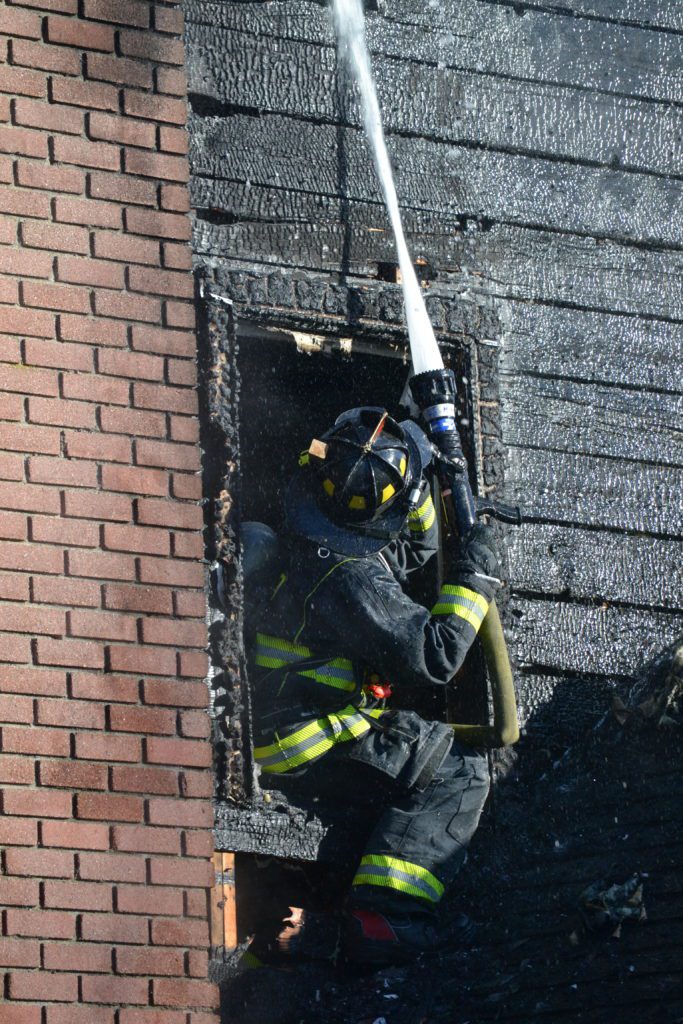 A FIREFIGHTER perched on the charred remains of a second-story window aims a stream of water on the exterior siding of the home at 288 Park St. Sunday morning. (Dylan Conway Photo)

NORTH READING — An alert passerby coupled with a swift response from the North Reading Fire Department enabled a house fire to be quickly extinguished in the frigid cold on Sunday morning.

Fire Chief Don Stats reports that North Reading Fire was dispatched to 288 Park St., across the street from the Masonic Lodge, at about 8:20 a.m. Jan. 16 after the homeowner was alerted to a fire at the front of the red Cape-style home by a passerby.

North Reading Engine 3, led by Capt. Dave Lee and firefighters Herb Batchelder, Vincent Zarella and Brian Letendre, was the first-arriving company. Upon arrival, firefighters found heavy fire showing on the first floor porch toward the front right-side of the 2-1/2 story home. The fire had also extended along the chimney on the outside of the home, into the second floor and the attic area.

Firefighters worked to knock down the exterior fire and prevent it from spreading farther through the house. They then repositioned inside and knocked down a small amount of fire on the second floor.

The only person home at the time of the fire was able to safely get outside prior to the arrival of firefighters. No injuries were reported in the incident.

The house is currently uninhabitable due to smoke and water damage, and the resident is being assisted by friends and family.

Mutual aid was provided on scene by the Reading Fire Department while the North Reading Police Department assisted with traffic control, shutting down Park Street between Main Street/Rte. 28 as well as at the intersection of Park/Winter Sts. and Freedom Drive. The North Reading DPW provided salt to combat ice buildup. Rehab Five also responded to the scene to provide support to personnel working the fire.

The Middleton and Wilmington Fire Departments provided station coverage. The fire was extinguished by 8:26 a.m. and the all-out on the alarm was sounded at 10:51 a.m.

“I want to commend Engine 3 for their work knocking down the fire (Sunday) morning before it could spread farther through the home,” Chief Stats said.

“I would also like to thank all of our mutual aid partners, including Rehab Five, North Reading DPW and North Reading Police, who are valuable resources for our firefighters when working in the cold weather conditions like we experienced (Sunday) morning,” the chief added.

The origin and cause of the fire remained under investigation by the North Reading Fire and Police departments and the Office of the State Fire Marshal at press time.