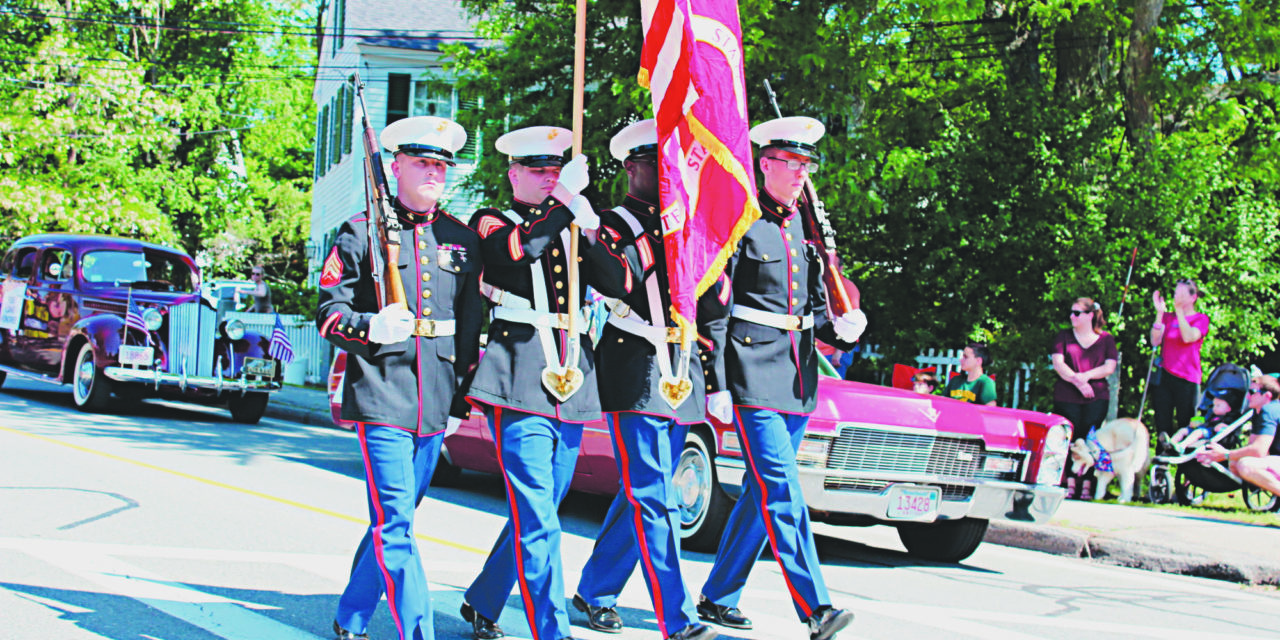 NORTH READING — On a spectacularly warm and sun-splashed day, traditional Memorial Day ceremonies and a parade with the full participation of townspeople returned to town on Monday after a two-year COVID-induced absence.

The town’s remembrance began with the 47th consecutive morning ceremonies at the town’s three cemeteries plus the Blue Star Memorial Byway in Ipswich River Park, coordinated by the North Reading Company of Minit and Militia under the direction of Captain Richard Stratton.

Dressed in Colonial-era garb and carrying replica muskets, the Minit and Militia was joined by Boy Scout Troop 750, under the guidance of Scoutmaster Kenyon Koeper and a pair of buglers from the NRHS Marching Band, Harley Duffley and Shane Hanson. At Riverside Cemetery, Harmony Vale Cemetery, the Blue Star Memorial Marker, and the Park Street Cemetery, Sgt. Geoffrey Bemiss offered opening remarks, prayer and a roll of honor, followed by the firing of three volley rounds and “Taps” by Duffley and Hanson. 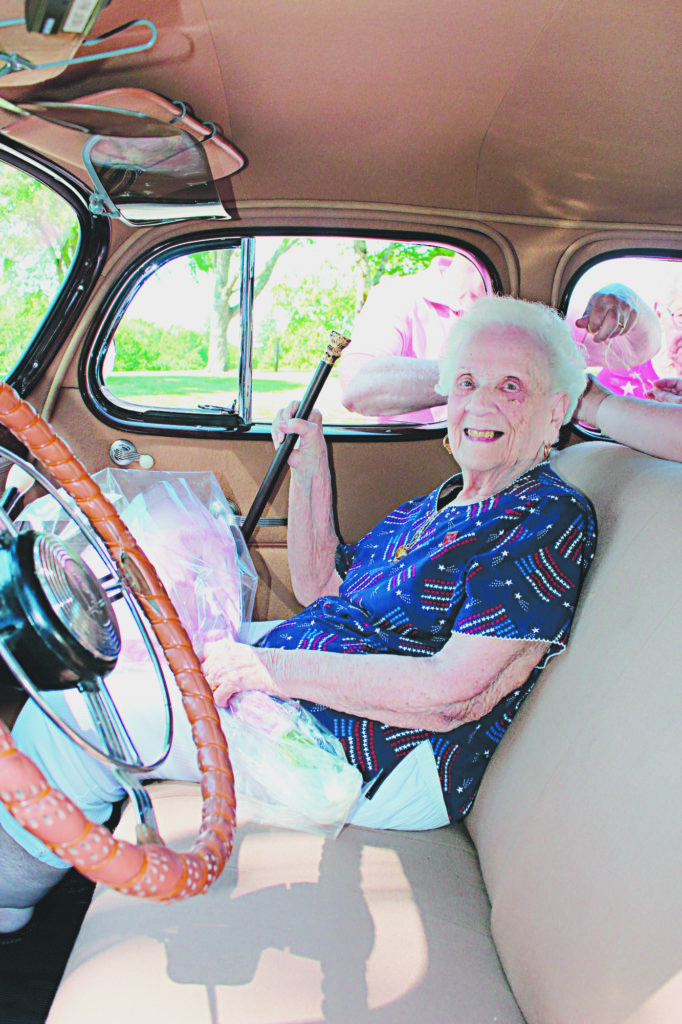 BEAMING! Boston Post Cane Oldest Citizen honoree Carmen DiChiara holds up her honorary engraved cane. At nearly 99, she was thrilled to ride in Gordon Hall’s 1949 Packard in the Memorial Day parade and wave to those watching the parade. (Heidi Hastings Photo)

These services are open to the public and among the attendees was State Rep. Brad Jones and Town Administrator Mike Gilleberto.

The Minit and Militia and Boy Scouts reassembled at the top of the Town Common where they were joined by the hundreds of spectators, most wearing red, white and blue, who came to see the parade.

This year marked the 155th anniversary of a Memorial Day observance by the United States as the entire country paused to remember and reflect upon the sacrifices made by those men and women who have fought and died for the preservation of the freedoms we continue to enjoy today.

A bicycle decorating contest was held prior to the parade, judged by Town Moderator John Murphy. Winning ribbons were Layla Roy, Norah Roy and Max Gilleberto. All participants were invited to join the parade on their bicycles.

North Reading’s Boston Post Cane honoree as the town’s oldest citizen, Carmen DiChiara, who is nearly 99, was escorted in a classic 1940s Parkard owned and operator by Gordon Hall. She was accompanied her son Michael and daughter-in-law Diane. 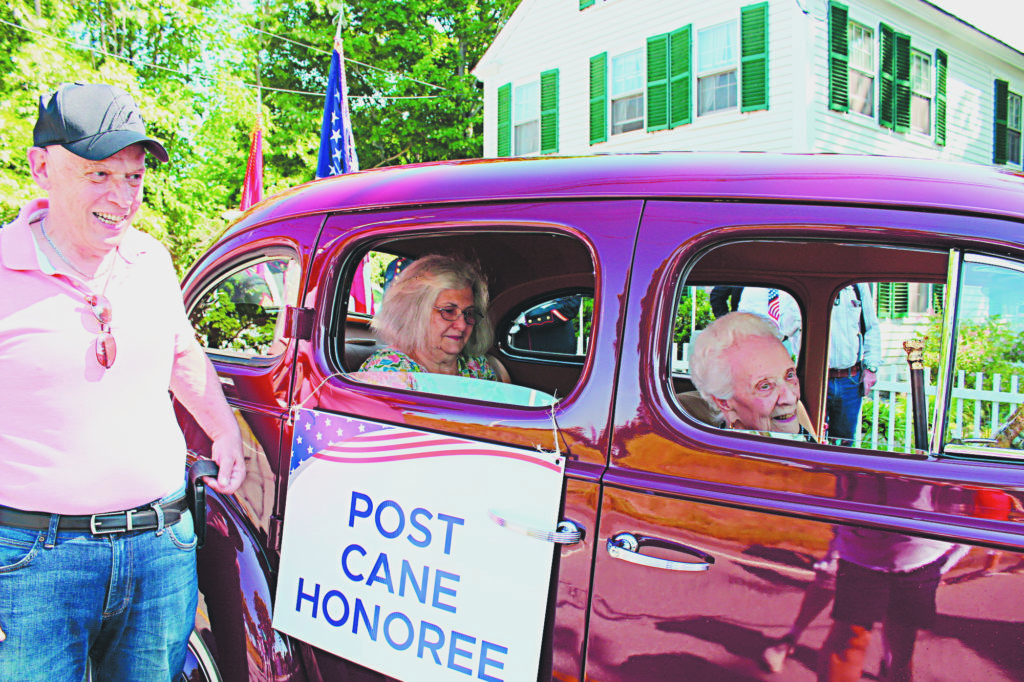 A float was provided for veterans by the North Reading Veterans Department and other veterans rode in classic cars. The VFW Post 10874 was also represented under the command of Arthur G. Cole Jr.

The Marching Hornets, under the direction of Ben Owens, provided the traditional marches and patriotic tunes throughout the parade and traditional ceremonies on the common.

Well-represented were Boy Scouts from Troop 750 and Cub Scouts from Packs 731 and 729 along with Girl Scouts of Eastern Mass. from all North Reading troops. They took turns carrying their handmade banners representing their troops. Teams from both North Reading Little League and North Reading Youth Softball also marched and tested their throwing skills by tossing lots of candy to the kids lining the route. 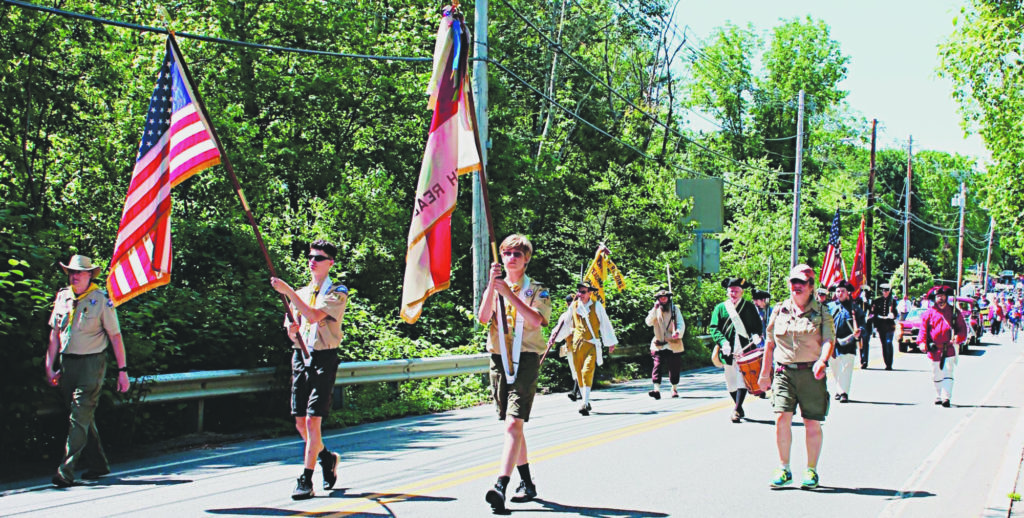 To top it off there was a plethora of antique cars, from the Model T era to the hot rod era and even an amphibious vehicle driven by Art Gonsalves that is regularly seen floating around Martins Pond. Apparatus of all sizes from the North Reading Fire Department capped off the parade.

After the parade, formal ceremonies commenced back at the veterans memorials on the town common where Sgt. Geoff Bemiss served as emcee. Pastor Kirk Patterson of the Trinity Evangelical Church offered both the invocation and benediction.

Following the playing of “The Star-Spangled Banner” by the NRHS Marching Band and a moment of silence offered for those lost in all of our nation’s wars, invited guest speaker Liane Gonzalez of the Select Board stepped to the podium.

After welcoming those in attendance on behalf of the board, she thanked “everyone who has worked and donated their time to bring everything together and make it possible for all of us to come together today.” 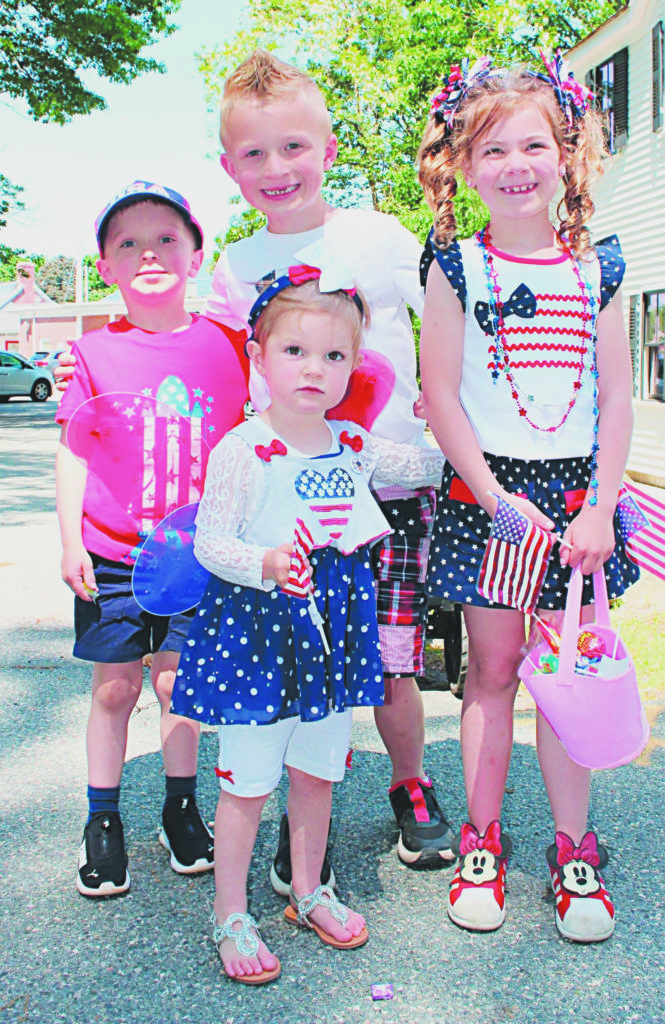 THREE CHEERS for the red, white and blue! These kids are getting excited for the town’s Memorial Day parade to start: Olivia Wallace and Nola Lee Miller (in front) and Jack Wallace and Levi Miller. (Heidi Hastings Photo)

“I truly believe that none of us will ever take it for granted again,” she said. “I want you all to know what an absolute honor it is for me to represent the Select Board here today and also to be going into my fourth year as liaison to the Veterans’ Committee. I come from a long line of veterans in my family, from World War II to Korea to Vietnam, and more recently with cousins who have served in Iraq and Afghanistan. The pride and respect has been engrained in me from a small child and I don’t take this honor lightly.”

“Buy today is not about all who served; that day comes in November, which by the way with a unanimous vote of the Select Board last October is proclaimed as Veterans Month here in North Reading. But this day is to honor those who paid with their life and blood. This isn’t simply a day off. This is a day to remember those who never came home, those that paid for every free breath you breathe, and to remember that freedom isn’t free.”

“In closing I would like to share a poem with you which has special meaning to me so please bear with me if I take a pause.”

Gonzalez then recited, “The Final Inspection,” by Sgt. Joshua Helterbran, which is reprinted below: 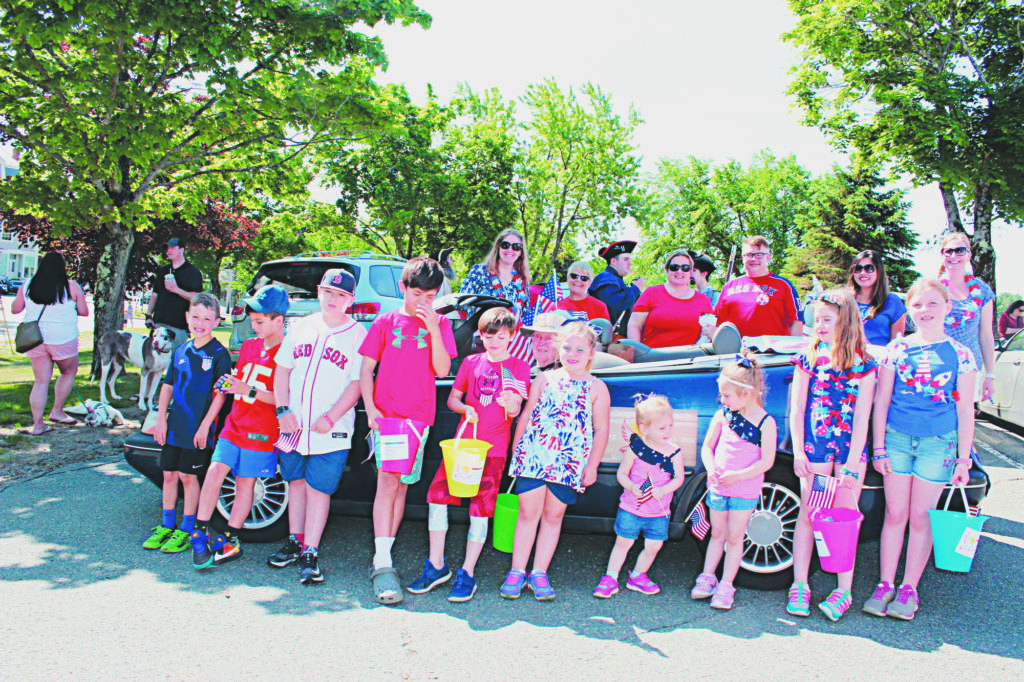 CALLING IN THE REINFORCEMENTS. Children from the Union Congregational Church are well-prepared to distribute buckets full of candy to youngsters lining the Memorial Day parade route. (Heidi Hastings Photo)

The soldier stood and faced God,

Which must always come to pass,

He hoped his shoes were shining,

Just as brightly as his brass.

How shall I deal with you?

Have you always turned the other cheek?

To My Church have you been true?”

The soldier squared his shoulders and said,

Because those of us who carry guns,

Can’t always be a saint.”

“I’ve had to work most Sundays,

And at times my talk was tough,

And sometimes I’ve been violent,

Because the world is awfully rough.”

“But, I never took a penny

That wasn’t mine to keep…

Though I worked a lot of overtime

When the bills got just too steep.”

“And I never passed a cry for help,

Though at times I shook with fear,

And sometimes, God forgive me,

“I know I don’t deserve a place

Among the people here,

They never wanted me around,

Except to calm their fears.”

“If you’ve a place for me here, Lord,

It needn’t be so grand,

I never expected or had too much,

But if you don’t, I’ll understand.”

There was a silence all around the throne,

Where the saints had often trod,

As the soldier waited quietly,

For the judgment of his God.

You’ve done your time in Hell.”

Following her remarks, “American March Classics” was then performed by the NRHS Marching Band followed by “America the Beautiful.”

As Capt. Rich Stratton played his drum, the members of the Minit and Militia followed the instructions of Minit and Militiaman Gordon Hall, a founding member of the organization, in firing the volleys.

Under the command of Arthur C. Cole Jr., members of the North Reading VFW Post 10874 placed wreaths at the base of each veterans memorial. “Taps” was then played by buglers Harley Duffley and Shane Hanson as the veterans stood at attention; among them was Ed Piercey whose service began at the end of WWII.

Pastor Patterson’s benediction, a performance of “God Bless America” by the NRHS Marching Band, and closing remarks by Sgt. Bemiss concluded the day’s events. Participants were invited to stay for refreshments in the Edith A. O’Leary Senior Center. 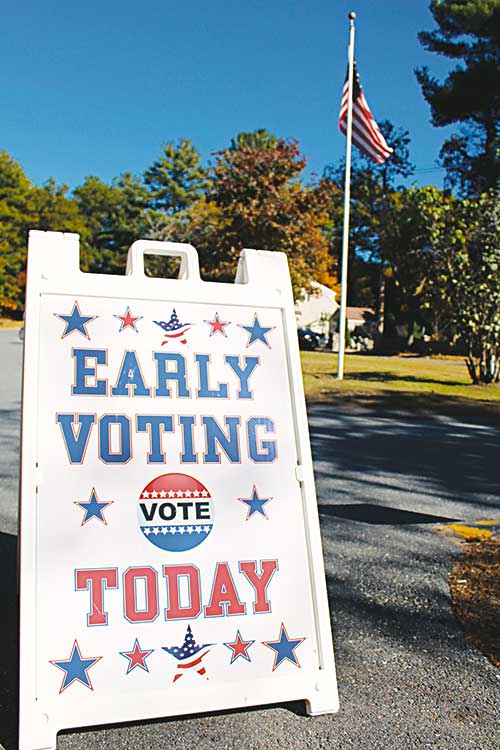