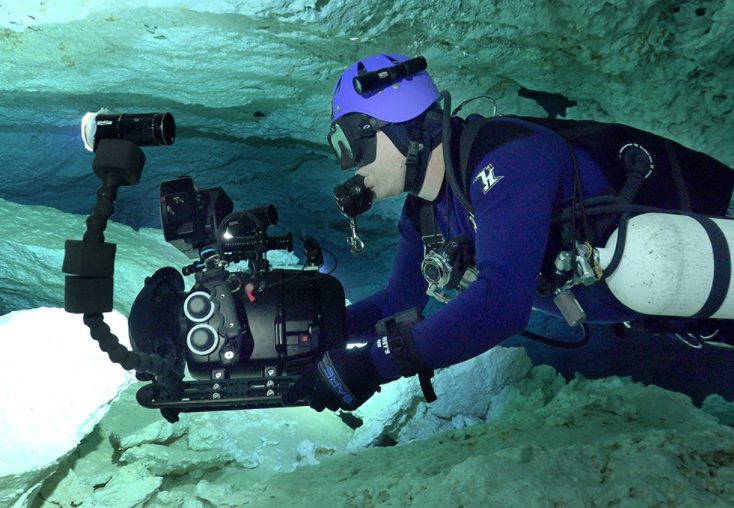 DIRECTOR and cinematographer Jonathan Bird filmed the breathtaking underwater scenes in “Ancient Caves.” As the camera lens was extremely vulnerable to being scratched in tight quarters, its lens cap was left on until the last minute, when filming would begin. (Courtesy MacGillivray Freeman Films)

NORTH READING — Emmy Award-winning underwater cinematographer Jonathan Bird, a North Reading resident, has made his IMAX debut at the Museum of Science’s Mugar Omni Theater with the showing of his latest film, “Ancient Caves.”

“Ancient Caves” explores some of the world’s most remote and beautiful caves and shows scientists looking to better understand Earth’s climate history by studying ancient cave formations in the world’s most hidden realms. The film specifically follows paleoclimatologist Dr. Gina Moseley on her mission to unlock the secrets of the Earth by searching for stalagmite samples – geologic “fingerprints” – that reveal clues about the planet’s climate history.

Director Jonathan Bird attended two special premiere screenings of his film at the Museum of Science on October 1 and October 3 to introduce the film and engage in a Q&A with the audience afterwards. Since he always knew that he wanted to make a film that took advantage of the immersive expanse of the five-story high, domed Mugar Omni Theater, Bird is incredibly happy that “Ancient Caves”  opened in the theater for which it was specifically filmed. 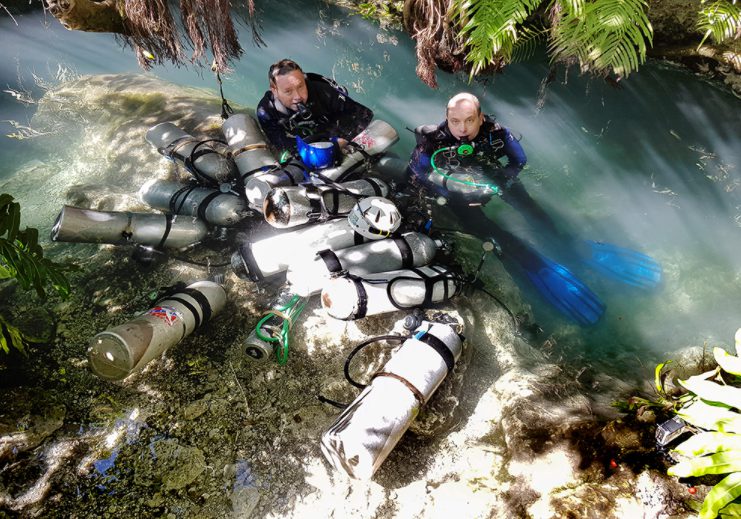 COMPLETING DECOMPRESSION on oxygen are underwater cinematographer and director Jonathan Bird (left) and support diver Todd Kelly after a three-hour dive to the Fangorn Forest in Crystal Cave, Abaco, Bahamas. All of the scuba tanks in this photo were needed by them to reach Fangorn, as it requires more than a mile of swimming, making it one of the most remote places on Earth. (Courtesy MacGillivray Freeman Films)

Bird’s interests in marine science and photography extend as far back as his high school and college days. He learned to scuba dive while in college at Worcester Polytechnic Institute and combined his passion for photography with diving, later forming the Oceanic Research Group, Inc. in 1991 to produce educational ocean-related films. He has since made 13 educational films for use in schools and also hosts a family-friendly underwater science and adventure television program for children called “Jonathan Bird’s Blue World.”

“Ancient Caves” is Bird’s latest cinematic achievement and it portrays stunning underwater scenes and landscape visuals of caves in France, Iceland, and the Bahamas, as well as Mexico’s Yucatan Peninsula and Devil’s Hole in Nevada’s Death Valley National Park.

In the film, viewers are introduced to Dr. Moseley, as well as trained technical divers Brian Kakuk and Todd Kelly, who travel to the depths of underwater caves to retrieve stalagmite samples for paleoclimatology study and review.

While shooting “Ancient Caves” Bird, Kakuk and Kelly had to remain vigilant and mindful of timing, as divers are only granted a few precious minutes to retrieve a sample before they are forced to decompress, a process that can take up to three or four hours. Cave diving, as illustrated in the film, is not for the faint of heart, as even technical divers can get stuck in tight rock formations, or what are known as restrictions, on their way to remote, submerged destinations. 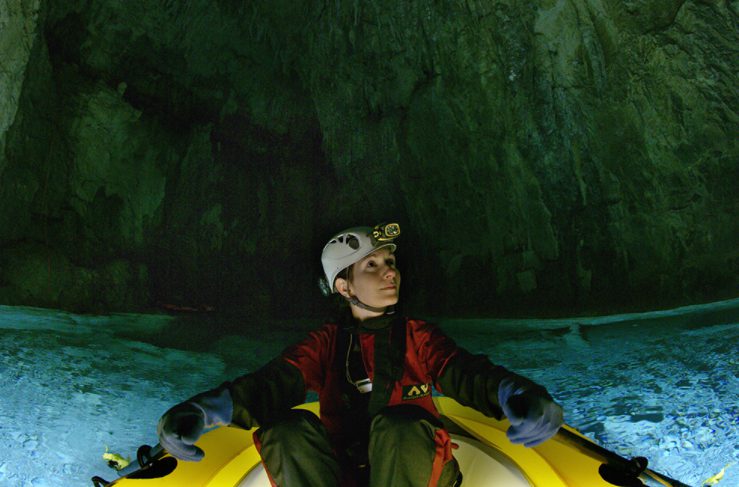 Bird’s IMAX debut is also unique in that it features music recorded from a live orchestra, which adds a layer of emotional depth to the audience’s response to the visuals on-screen.

In one behind-the-scenes video, Bird expressed: “‘Ancient Caves’ is a film that is deeply emotional. You’re bringing the viewer into places that they would never go and you’re setting a mood. You’re trying to get them to feel what it’s like to be underwater in a cave…music is an incredible part of getting people to have the right emotion.”

Five years in the making

Bird was fortunate enough to travel internationally to shoot scenes with his crew over the course of five years, and now, his film is available to view across the globe. In addition to the Museum of Science, “Ancient Caves” is currently playing at the McWane Science Center in Birmingham, Alabama, the Gulf Coast Exploreum Science Center in Mobile, Alabama, the Museum of Discovery and Science in Ft. Lauderdale, Florida, the Great Lakes Science Center in Cleveland, Ohio, the Hong Kong Space Museum in Hong Kong, China, and the Swiss Museum of Transport in Lucerne, Switzerland. The film will be opening at a few more venues in the USA and China soon.

In reference to the film, Bird stated, “These deep underwater caves are other-worldly, like something straight out of sci-fi film, and viewers can expect to see things they’ve never seen before. The film has something for everyone, whether it’s adventure, science, or just pure beauty.” 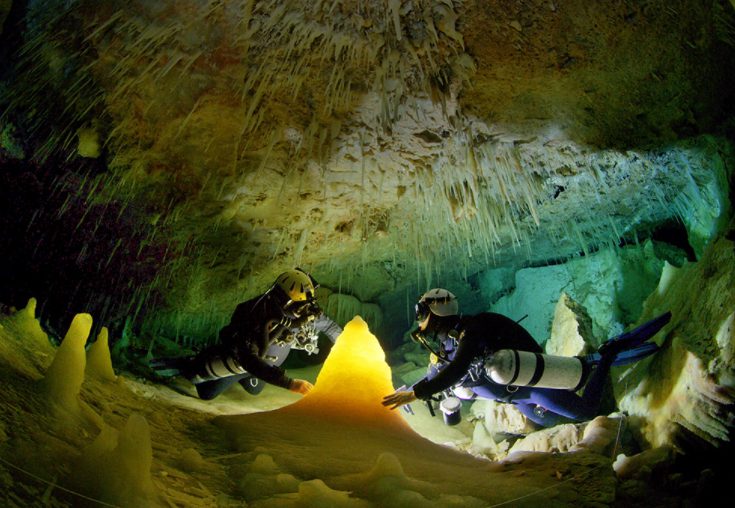 “Ancient Caves” is currently playing at the Museum of Science in the Mugar Omni Theater. To purchase tickets, visit https://www.mos.org/explore/omni/ancient-caves

To learn more about the filmmaking process and see behind-the-scenes videos and photographs, visit https://macgillivrayfreeman.com/project/ancient-caves/

“Ancient Caves” is narrated by Emmy Award-winning actor Bryan Cranston, and is an Oceanic Research Group Films production produced with support from the Giant Dome Theater Consortium and presented by MacGillivray Freeman Films. 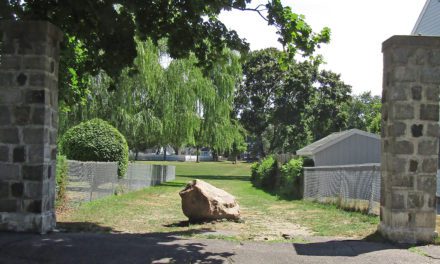