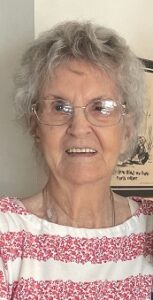 A woman of faith who enjoyed cooking, dancing and music

NORTH READING — Elsie  M.  (Kingsbury) Smythe, 97, of North Reading, passed away at her home peacefully on her heavenly journey on Sunday, July 24, 2022. She was the beloved wife of the late Charles W. “Ted” Smythe.

Born in Everett on June 26, 1925, she was the daughter of the late Homer A., Sr. and Sarah C. (O’Hanley) Kingsbury. She was a graduate of Somerville High School. She worked for Sears, Roebuck and Co., in Boston, for many years and later for the Harvard Coop in Cambridge. Elsie was a resident of North Reading since 1979 and a member of St. Theresa’s Church.

She enjoyed cooking for her family, dancing at Mosleys by the Charles, and all kinds of music. She was very devoted to our Blessed Mother Mary. Elsie was grateful for the loving care she received from her son Dan and his wife Barbara.

In lieu of flowers memorial donations may be made in her memory to St. Jude Children’s Research Hospital, 501 St. Jude Place, Memphis, TN 38105-9929.

To leave an online message of condolence, please visit www.croswellfuneralhome.com.