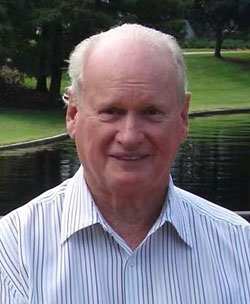 Born in Queens, New York to parents who immigrated from Ireland, John was one of four boys.  John attended Queens College before attending and graduating from the State University Maritime College at Fort Schuyler.  He then served two years active duty at sea as a USNR Officer.  John enjoyed a 36-year career with the General Electric Company in marine propulsion machinery design, development, installation, and application and program management.  He was a professional engineer in the Commonwealth of Massachusetts, authored four technical papers on steam propulsion technology, and served as the Society of Naval Architects and Marine Engineers (SNAME) New England Chairman.

In 1963, John was assigned to the USS Thresher deep diving tests but due to delays in the schedule he did not attend the sea trial.  He was forever impacted by the tragic fate of the USS Thresher.  John was also honored to be a member of the sea trial team for the aircraft carrier, USS JFK, commissioned in 1968.

John was active in the North Reading community, where his family was raised, as a CCD teacher with St. Theresa’s Church from 1965–1978. He was a part of the Cub Scouts of America, the Public School Housing Committee, and the PTA Chairman Ways & Means.

John is survived by four daughters, Linda Caudill and her husband Rick of Blacksburg, Va., Susan Murray and her husband Fred of Wilmington, Mass., Barbara Darby and her husband Lou of Exeter, N.H., Diane Casey of Amesbury, Mass., and one son, Peter Casey and his wife Karen of North Reading. He is also survived by his eight grandchildren, John, Casey, Michelle, Matthew, Michael, Caroline, Meredith and Catherine.

A private burial will be held in St. Petersburg, Fla. The family kindly asks in lieu of flowers donations be made in memory of John P. Casey to Suncoast Hospice Foundation, South Pinellas Care Center (SPCC), 5771 Roosevelt Blvd, Clearwater, FL 33760.