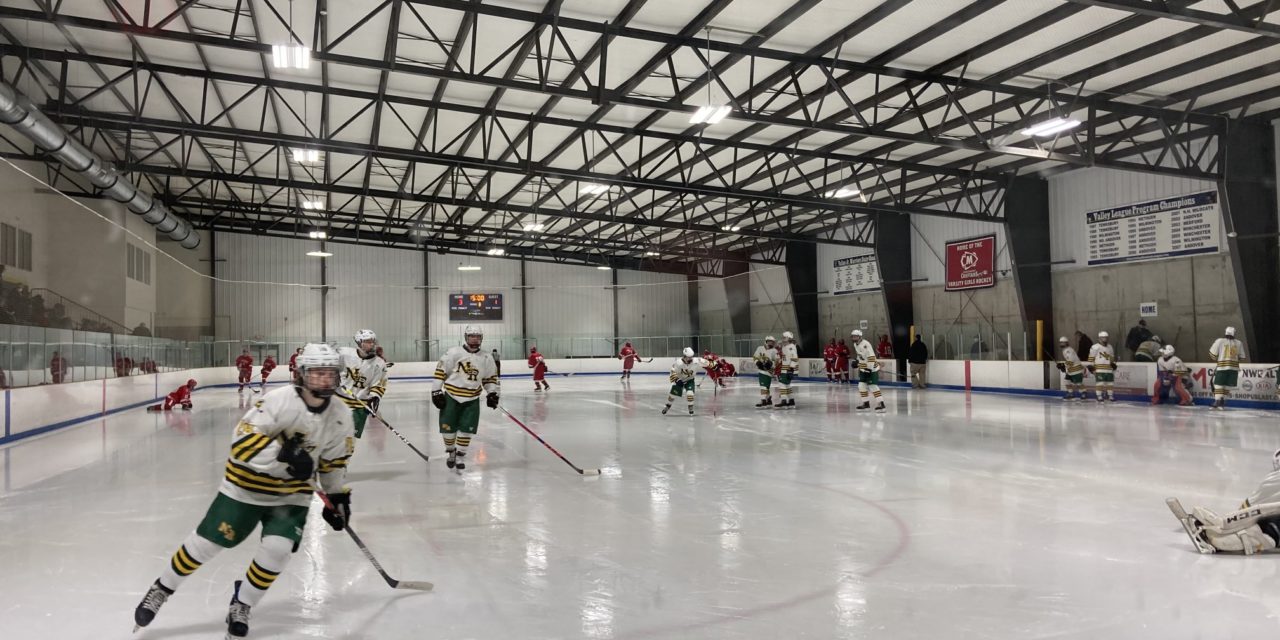 THE NRHS boys’ hockey team improved to 5-1 with a 6-2 victory over Amesbury on Jan. 5 at the Haverhill Valley Forum. (NRHS Athletics Photo)

HAVERHILL — Longtime NHL coach Scotty Bowman, who has nine Stanley Cup championships to his credit in a storied hockey career, once said, “I found out that if you are going to win games, you had better be ready to adapt.”

Thus far this season, the North Reading hockey team has successfully adapted and continues to win despite pandemic-driven disruptions and postponements. Most recently, the under-strength Hornets easily outpaced the Amesbury Indians, 6-2, to win their fifth straight and improve to 5-1 overall.

Similar to the 1-0 win over Essex Tech a week earlier, North Reading labored to overcome a bout of first period lethargy before finally taking command mid-game.

“I felt in the locker room before the game that we seemed a little bit flat,” said North Reading coach Brian McAuliffe. “The energy definitely wasn’t there so the message between periods was let’s go out there and play our game and up the physical aspect.”

The Hornets, which have now outscored opponents by a 26-10 margin, delivered with four unanswered after the talk. Leading the offensive surge was senior forward Dean Rooney, who added two scores to his team-leading 7-goals and senior forward Andrew Daley, who also picked up a pair, including the eventual game-winner with a second period buzzer-beater which completely discouraged the 2-3 Indians.

“Those are the kind of things really good teams do throughout the season,” said McAuliffe.

Evenly-played through the first 15 minutes, the clubs emerged knotted at a goal apiece. Amesbury claimed a 1-0 lead at 5:27 on a power play goal from Jack Venturi. North Reading answered with a minute left when senior blue-liner Matt Ryan picked up his first of the season on a feed from Nick Albano. Ryan slid a shot from the left circle that beat Amesbury netminder Trey Marcotte through a screen.

Marcotte seemed hesitant in goal. In several instances during the first frame, while the Hornets were pressing for an equalizer, the junior repeatedly glanced in the net behind him only to find the would-be goal beneath his pads. It was a case of goalie puck-luck that the Hornets weren’t ahead by several at this juncture. Marcotte’s good fortune ran out at 5:41 of the second, however, as Cole Lopilato set the table for Rooney’s first of the night. Freshman Thomas Gazda added a helper on the go-ahead goal.

Daley buried a backhander with no time left in the second, on assists from Matt Young and Albano. It was a backbreaker for Amesbury, which was designated as the visiting team at the Haverhill Valley Forum.

The plight went from bad to worse for the Indians as third period action got underway. The officials, seeking to control what was fast becoming a chippy game, were handing out penalties like candy on Halloween. While the first two periods featured only a pair of infractions in all, there were seven whistled in the final frame, including a five-minute major levied on Lopilato for a borderline charge. North Reading took full advantage of rapidly-improving special teams, with back-to-back power play goals.

Matt Young made it 4-1, from Lopilato and Daley and a minute later, Daley struck for his second of the night, from Young and Albano, to effectively put it out of reach.

“The power play was definitely something we knew we had to improve on,” said McAuliffe. “During a five-minute major against Essex Tech, it didn’t yield results. So, over the last week, we focused on the power play in practice and tweaked a few things and it paid off tonight.”

The teams traded goals down the stretch. With helpers from Ryan and Luke Wells, Rooney netted his second of the night with 22-seconds remaining. Prior to that, Amesbury’s Ethan Litner beat Sam Elliott, who turned aside 19-shots in the effort.

“Sam played a great game,” said McAuliffe. “He’s been phenomenal in net and he deserved this win. There’s a pretty good chance he has earned the green jacket tonight.”

Following the postponement of last Saturday’s skate with Rockport, North Reading faced archrival Lynnfield in the first of two this season on Wednesday evening (results in after press time) and will visit the 2-3 Triton Vikings Saturday afternoon.