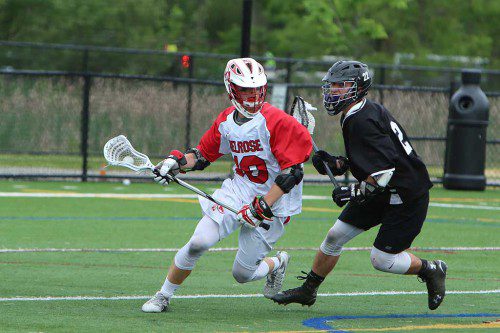 MELROSE — On Thursday, June 2 the Melrose High boys’ lacrosse team produced a first round home win over Shawsheen Tech in the MIAA Div. 2 North playoffs by a score of 18-5. That easy win advanced them to face a brutal opponent in No. 1 seed Beverly, who at 19-1, is considered a lock on a Div. 2 North title.

While the odds were against them, Melrose managed to scare the Panthers with an overall strong effort in their 14-11 loss at Endicott College in Beverly on Tuesday, June 7.  Melrose drew as close as 11-9 in the final minutes of play before Beverly’s Sam Abate pulled the game away with back-to-back goals that helped the Panthers close the door in a 14-11 victory.

“It was a great season,” said Melrose coach Matt James after the game. “Ipswich did a lot of things right, they’re a great team who capitalized on our errors, but we fought back hard in the second half and I’m proud of their effort.”

The loss ends Melrose’s playoff journey on a final record of 13-7, while across the bracket Wakefield fell in a double overtime heartbreaker on Tuesday to Winchester, setting up the Beverly Panthers to face the Winchester Sachems in Div. 2 North Finals.

Melrose’s Corbin White, Jack Wells and Mike Pedrini (5 goals) made sure Melrose did not go quietly into the night; with the latter Pedrini launching a furious second half offensive charge that brought Melrose within striking distance at 11-9. White meanwhile, helped Melrose get on board in the start of the game, scoring Melrose’s two goals. Teammate Jack Wells added two of his own to make it an 8-4 game at the half in favor of Beverly. At the net for Melrose, Connor Locke had five first half saves, including one at the buzzer and nine total for the afternoon.

“At halftime I told the boys that this was the team that is defining the Melrose program. But I questioned t’how hard are you working out there?’ and it stuck with them I think, they came out and played with intensity.”

The Panthers relied on multiple goals from attackers Hunter Spencer and Nick Diluiso who had three, while their goalie Kevin Morency was solid but not impenetrable. Coach James credits Melrose’s Cam Rosie for his fantastic coverage of Beverly’s Steve Abate, a Beverly player James considers having All-American potential.  “Cam had an amazing game. Keep your eye on this player. He’s a force,” says James.

given Melrose’s furious comeback in the third quarter when they limited Beverly to just three goals and flipped a 10-5 disadvantage to a 11-7 score by the fourth thanks to goals from Ryan McDermott and Jack Wells. From there, Melrose defense reared an ugly head, stuffing out attackers from behind efforts of Mike Calvert and Mike Cusolito, among others, while at the net Connor Locke held tight, denying multiple shots by Panther attackers. With 8:24 left in the contest, Melrose’s Mike Pedrini made it a game and silenced the crowd with a goal that narrowed the Panther lead to 11-9. Corbin White had his third goal of the night but unfortunately Beverly’s Abate found the net twice for the eventual 14-11 Melrose loss.

The team had fared much better against their opening round opponent, Shawsheen Tech, whom they beat 18-5 on Thursday, June 2 thanks to a nine goal effort by Melrose’s Jack Siebert. Among those also leading in scoring were Corbin White (3), Jack Wells, Jack Mandracchia, Mike Pedrini and Ryan McDermott. Connor Locke at the net had several saves and limited Shawsheen to just two goals in one half of play.

Melrose had the pleasure this season of seeing two of their players break the school record in scoring, held by MHS alum Will Mandracchia (51 goals). Mike Pedrini broke it this season by earning 57 goals, while senior Jack Siebert went further and now holds the school record with 76. For his efforts, the senior was recruited by and will play for the Div. 1 Lehigh University men’s lacrosse team.