After shutting out Danvers, falls to Masco in quarterfinals, 4-1 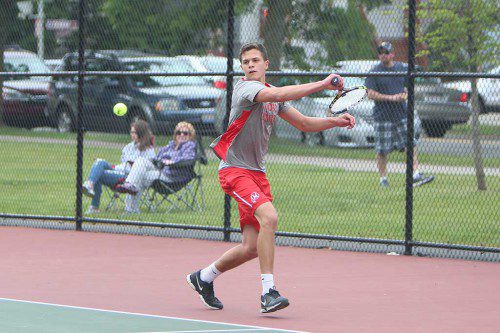 JACK MAYS came up a winner in second singles for the MHS boys’ tennis team in their win over Danvers. (Donna Larsson photo)

MELROSE — The Melrose Red Raider tennis team enjoyed an early victory against Danvers in the opening round of Div. 2 North playoffs on June 2 before falling to Masconomet, 4-1 in quarterfinals on Saturday, ending their season at a strong 13-5.

It wraps up another historic season for the Red Raiders, who earned their first sole possession of a league title in over 70 years when they beat Burlington on May 11.

According to head coach Matt Williams, there is nothing but pride for the team’s effort. “I told them [after the game] that they lost to a strong team with tough singles players and I was proud of their effort.”

Melrose swept Danvers on Thursday, June 5 at home at Lyons Court in a quick and easy match. Melrose’s Julian Nyland, Jack Mays and Sean Donovan all swept their singles competition while doubles parters Caleb Zimmerman and Sam Stallings (first) and Jason Jang and Sean Prendergast (second) prevailed in doubles. According to Williams, Mays played the best of his season. “That’s probably the best I’ve seen him play,” he notes.

On Saturday, fourth seed Melrose hosted fifth seed Masconomet at a 4 p.m. showdown in D2N quarterfinal play at Lyons Court in Melrose. Falling 4-1, Melrose found a highlight with a first doubles victory from Melrose’s Sam Stallings and Caleb Zimmerman by scores of 6-1, 6-2 who prevailed over Masco’s Kole Kosakowski and Kaylen Rivers. “They were on fire,” the coach notes. “Just played great.”  Rounding out the scoring was Alex Fizz over Melrose’s Julian Nyland 6-4, 6-4; Nick Marshall over Jack Mays 6-2, 6-4 and Max Gordon beat Sean Donovan in a marathon three-set win, 6-2, 5-7, 6-0. Melrose’s Jang and Prendergast also fell to Dan Miller and Haolan Zhan were also victors in a long three-setter, 4-6, 6-4, 10-7 (tiebreaker).

Williams acknowledged Masco’s hard-hitting singles players. “They were all tough and our singles players Julian, Jack and Sean played outstanding against them. Sean nearly won his match and our second doubles fought hard. Overall we were up against tough competition.”

Graduating this season is lone senior and captain Julian Nyland, who Williams hails as a top-notch athlete. “He’s had an amazing career and done great things for us. He had a tough job having to face the toughest competition in the division. And he is playing at his peak now.”

Returning next season are the rest of the squad of the 2016 league champs which means for tennis fans: expect another winning season in 2017. The coach confirms, “We have 6 or 7 starters returning. We’ll see where we will go with our roster – we’ll be good.”