Waged a valiant battle against ALS 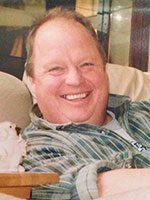 SAUGUS —  Paul M. Thibodeau, of Saugus, formerly of North Reading, age 55, passed away peacefully, surrounded by his loved ones, on Wednesday, Oct. 28 after a valiant fight against ALS.

Born in Lynn and raised in North Reading, he was the son of Joanna (Domey) Thibodeau of North Reading and the late Paul T. Thibodeau. He was the owner of P.M. Thibodeau Contracting and a member of the Lynnfield Zetland Lodge, AF&AM. His hobbies included reading, fishing, hiking, camping, skiing and adventures with his daughters, his nephew Mike and his niece Joelle. He had an infectious laugh, a wicked sense of humor and he LOVED hanging with his grandson.

Besides his mother Mr. Thibodeau leaves two daughters, Nicole Thibodeau of Rowley and Sarah Thibodeau of Lynn; one grandson, Lucas; one sister Suzanne Sierra of Peabody; one brother, John Thibodeau of Danvers. He is also survived by his former wife Kimberly (DiGangi) of Lynn, four nieces and three nephews.

In lieu of flowers donations in Paul’s memory may be made to the ALS charity of one’s choice.

Mr. Thibodeau’s friends and family gathered at the Bisbee–Porcella Funeral Home, 549 Lincoln Ave., Saugus  on Tuesday, Nov. 3 at 11 a.m. followed by a Celebration of Life at Puritan Lawn Memorial Park in Peabody. For condolences, www.BisbeePorcella.com.