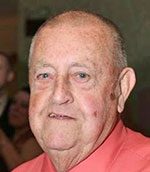 Son of the late Benjamin and Madeline (Ames) Webster, he attended Haverhill Public Schools and the former Haverhill Trade School. He served with honor as a Staff Sergeant in the U.S. Army during the Korean Conflict and was first employed in the local shoe industry. At the time of his retirement, Mr. Webster had worked for many years at Western Electric Co. A.T.& T. Technologies and Lucent Technologies.

An avid and accomplished candlepin bowler, Mr. Webster developed his interest while working as a pin setter in his youth at the former City Lanes in Downtown Haverhill. He was a Certified Candlepin Bowling Instructor and member of the Sunday Professional League and played in and won several tournaments on the local and regional levels. In his later years, he worked at Pilgrim Lanes in Haverhill.

He was an avid sports fan and youth softball coach and an avid daily walker until recently and also enjoyed collecting antique items.

A celebration of Mr. Webster’s life was held on Wednesday November 4,  at Berube–Comeau Funeral in Haverhill. His funeral service followed and concluded with the rendering of Military Honors by the U.S. Army. In lieu of flowers the family requests that memorial donations be made to The American Lung Association, 55 West Wacker Drive, Suite 1150, Chicago, Ill 60601.To send a message of condolence to the family or to find directions to our home, please visit www.berubecomeau.com