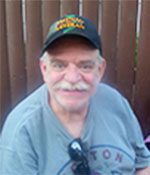 Born in Lynn, he was the son of the late William N. and Eileen D. (Lucy) Welch.

He was a police officer for the Town of Lynnfield for 10 years. He then worked as a heavy equipment operator and truck driver for Tri-Mount Bituminous for three years.

The funeral was held on Saturday at 8 a.m. from the Cuffe-McGinn Funeral Home, 157 Maple St., Lynn, followed by a funeral Mass in St. Pius V Church, Lynn at 9 a.m. Burial in Pine Grove Cemetery, Lynn.