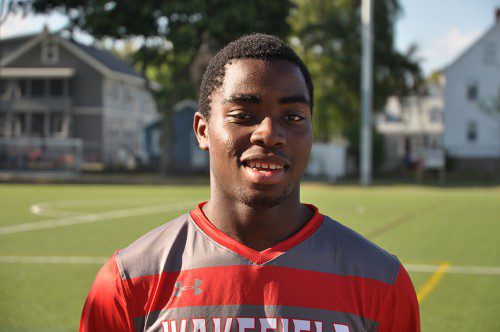 QUICK DISPOSAL would like to congratulate Mohamed Janga for being named Wakefield Memorial High School Varsity Boys’ Soccer Player of the Week. This season would look entirely different if it were not for the play of Janga. Mo has been a massive part of Wakefield’s success. Played primarily as the lone striker in Wakefield’s system, Mo is often outnumbered 4-1. Opposing sides soon found out that they needed a few more players to defend him. A three year varsity player, Janga’s work ethic is enough to give any defensive units fits and that’s exactly what he does. Mo’s ability to close down distances and pressure the ball is second to none. While on the ball, Mo has the ability to shield off multiple defenders while creating space that allows for his teammates to run on goal, hold possession until help arrives or dribble on net himself. This past week Mo helped the Warriors tie first place Burlington, beat rival Watertown and scored the first goal in Wakefield’s big win against Swampscott on Senior Day. (Brian Cusack Photo) 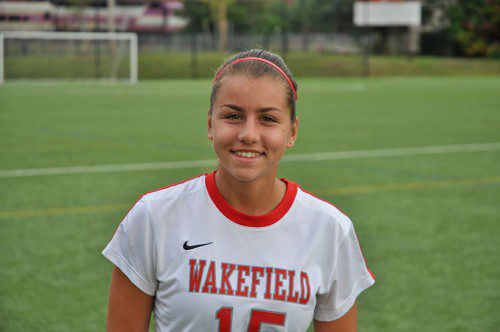 COMMTANK would like to congratulate freshman Christina LeBlanc for being named Wakefield Memorial High School Varsity Girls’ Soccer Player of the Week. Christina had just returned to full participation following a concussion. In both games last week against Burlington and Watertown, she reappeared as physically fit, skilled and determined as ever. At the start of the season, Christina was moved from the forward position to the outside right-midfield spot. Her defensive and offensive skills are equally as developed and threatening for an opponent, an essential quality at the midfield especially. Her transition to this position was an enormous gain for the team as a whole, while still being able to use her on the forward line. Last week, Christina played with intensity unmatched by most. Coupled with this intensity is a tremendous ability to read the game and be involved in activity up and down the sideline. Defensively, this freshman player recovers with speed and can identify when to contain and when to go in for the tackle. It is extremely difficult for a player from another team to beat her one-on-one. Offensively, she is smart about using the space around her whenever it is available or taking one or two touches before finding one of her teammates to pass to. After Christina releases the ball she is immediately on the move, wasting no time to re-involve herself in her team’s possession. This puts her in the middle of many give and go combinations and overlapping runs. She has the skill of players at the higher levels to “keep her head on a swivel” as she is continuously looking around her to find her opponent, her team and her next possible move. She is never satisfied with the last play, she always wants more and better from herself. Christina’s hard play is matched by her well defined skills and as a freshman, the Warriors are very excited about her three future years as a member of the varsity team. (Brian Cusack Photo)