Boys’ soccer team gets in tourney 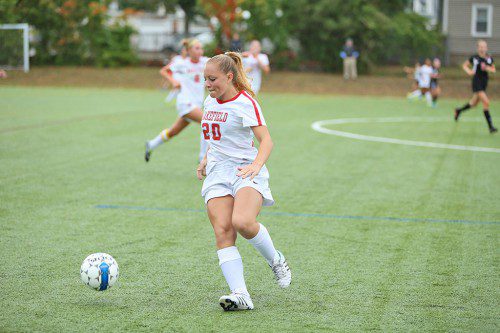 JESSICA VINCIGUERRA, a senior, chases down a bouncing ball headed her way during a recent game. The Warriors came up short by a 1-0 score to Bishop Fenwick last night in the regular season finale at Walton Field. (Donna Larsson File Photo)

WAKEFIELD — The Wakefield Memorial High boys’ soccer team clinched a state tournament berth for the second year in a row with a helping hand from Belmont.

The Marauders blanked Wilmington 1-0 last night at Harris Field in a makeup game which allowed the Warriors to finish in second place in the Middlesex League Freedom division and gain entrance into the postseason for a second straight year.

Wakefield finished with a 5-7-4 league record which resulted in a second place finish. Wilmington finished in third by a point with a 4-7-5 record.

Wilmington (5-7-5 overall) needed a win or a tie to qualify for the state tournament and will miss the postseason for the first time in over a decade.

Wildcat defenders Quinton Foley and Deven Langenfeld played well in the loss for the Wildcats, as did midfielders Matt Spurr and Nick Haddad. Wilmington will close out the regular season Friday.

The Warriors are currently 6-8-4 overall and will await the tournament pairings which are being done on Monday, Nov. 2. The preliminary round and first round games are slated to begin on Nov. 4.