Pioneer AD Bierwirth looks back on a successful year 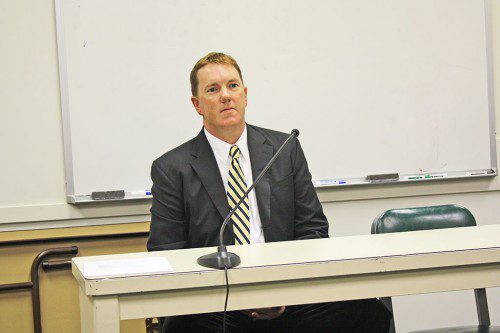 Bierwirth appeared before the School Committee to give an overview of his first year on the job. Before LHS hired Bierwirth last spring, the high school utilized two part-time ADs to facilitate high school athletics.

“This is the first year we have had a full-time athletic director in a very long time,” said Superintendent of Schools Jane Tremblay. “Mike has done a very good job since coming into this position.”

Bierwirth said his first year serving as LHS’ full-time AD was a “memorable year” for Lynnfield High athletics. He said a number of teams won Cape Ann League championships and a number of student-athletes were recognized for athletic achievement.

The athletic director personally thanked school officials for making his first year at LHS a year to remember.

Bierwirth said next year’s goal is to expand the website and use social media more frequently. Bierwirth and High School Principal Bob Cleary are also trying to incorporate ways for student-athletes to add information to the website, which he said will diversify the high school’s athletic program.

“It will give students an opportunity to work in an athletic management position,” said Bierwirth.

Bierwirth said the high school has 26 programs and 46 levels, which are broken down into varsity, junior varsity and freshmen. He said 70 percent of high school students participate in athletics, which he said is “staggering.”

“Out of our graduating senior class, 65 percent of the honor roll students participated in one or more sports,” said Bierwirth. “Fifteen graduating seniors will be playing at the collegiate level next year.”

Bierwirth attributed the student-athletes’ success this year to the high school’s coaches.

“I can honestly say we have the best coaching staff in the Cape Ann League,” said Bierwirth. “Not only do we have coaches who have a love of the game and are great with the X’s and O’s, but they generally have the interest and well being of the student-athlete at the forefront of everything they do.”

In addition to several remarkable team and student-athlete accomplishments, Bierwirth said the LHS fields complex and the amenities building has been a positive addition for student-athletes. He personally thanked Fields Committee Chairman Arthur Bourque and the rest of the committee for making the project become a reality.

“It’s a great place for student-athletes to call home,” said Bierwirth. “Every game we hosted, I received hundreds of compliments about the fields complex and none of that would have been possible without Arthur and the Fields Committee.”

Bierwirth said student-athletes learned “valuable life lessons outside of the classroom” while participating in community service projects. At the beginning of the school year, several captains attended a leadership training session offered by Core Trainings. Four juniors attended an MIAA leadership conference at Gillette Stadium in November “to learn the skills needed to lead their peers.”

Additionally, a number of athletic teams participated in community service project such as the swim team’s annual Christmas tree pick-up event, the cross country and track teams helping out at Huckleberry Hill School’s fun run and members of the boys’ lacrosse team volunteering at Geraniumfest. A number of teams also raised money for cancer research.

“The Lynnfield High School student truly understands that there is much more than being an athlete,” said Bierwirth.

With the school year drawn to a close, Bierwirth said he is looking forward to next year.

“Ultimately, my goal as the athletic director is to provide the student-athlete a unique experience both on the field and during their high school careers,” said Bierwirth. “It’s important that these students build life-long friendships and memories that will be with them long after high school. I feel we’ve accomplished a lot this year and I am excited for the challenges and opportunities that await us for the 2015-2016 school year.”

In response to a question from School Committee member Dorothy Presser, High School Assistant Principal Kevin Cyr said adding Bierwirth to the faculty has been “a game changer from a communication standpoint.”

“Mike is very proactive about what he does,” said Cyr. “I feel like we were always reacting in the past but Mike is everywhere. To have that presence and that immediate connection with parents and students has been a huge plus for us.”

“I think the only one who has been on the fields more than Mike has been Arthur, which is saying something,” said Cleary. “Mike has done a super job.”

“I think we made the right decision,” said Cammarata.

School Committee member Jamie Hayman said the high school’s athletic accomplishments are “remarkable.” He asked Bierwirth if he would like to add any new sports to the high school.

Bierwirth said the high school has no plans to add another sport, but he said there has been an increase in the number of girls who have expressed an interest in playing on the co-op girls’ ice hockey team with Peabody.

“We would like to have our own girls’ ice hockey program but right now the numbers are not there,” said Bierwirth.