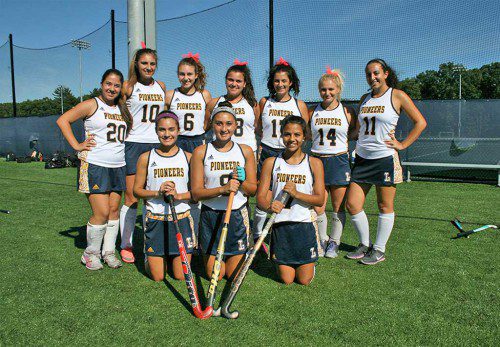 LYNNFIELD — It was a successful Senior Night for the Lynnfield High School field hockey team last Wednesday as they rolled over visiting North Reading, 5-0, to complete the season sweep over the Hornets in the final game of the regular season.

With the win, the Pioneers ended 2016 with an overall regular season record of 11-3-4. They went 10-3-3 in the Cape Ann League Kinney large school division, finishing second behind Masconomet (11-2-3). The Pioneers and Chieftains finished with identical overall records and tied each other twice by scores of 1-1 during the regular season.

Tri-captain Jaylin Grabau led the Pioneer attack with her first career hat-trick. She also had one assist.

“She has been showing some good stick work,” said Pioneers head coach Mamie Reardon, about the senior forward. “Two of her goals came off corners.”

Fellow seniors Jillian Zahar and Kathleen Hamm scored the two other Pioneer goals as Lynnfield led, 2-0, at the half. Hamm also had two assists in the game to finish with three points.

Before the game, the team’s seniors were honored. The team also honored the 12 North Reading seniors.

It was a nice bounce-back win for the Pioneers as they were blanked by host Newburyport, 2-0, on Oct. 24. The Clippers scored one goal in each half.

“We had a lot of shots but couldn’t pop one in,” pointed out Reardon.

Lynnfield split the season series against the Clippers this fall.

Picariello made three saves in that game.

Lynnfield earned a home field advantage in the first round of the Div. 2 North state tournament playoffs against Wilmington. The game will be played on Wednesday, Nov. 2 at 5:30 p.m. at Pioneer Stadium.

The seedings were announced on Halloween Day, with Lynnfield earning the No. 6 seed (11-3-4) in the 14-team bracket. Wilmington (9-7-2) was seeded 11th and competes in the Middlesex League.

The winner of this game will advance to the sectional quarterfinals to take on the winner of the Ipswich (No. 3 seed) vs. Stoneham (No. 14 seed) at a time and location to be announced on www.miaa.net.

Perennial powers Watertown, the No. 1 seed, and CAL small champion Manchester–Essex, the No. 2 seed, will be the teams to beat as the Red Raiders and the Hornets, respectively, both went undefeated this season at 18-0-0.