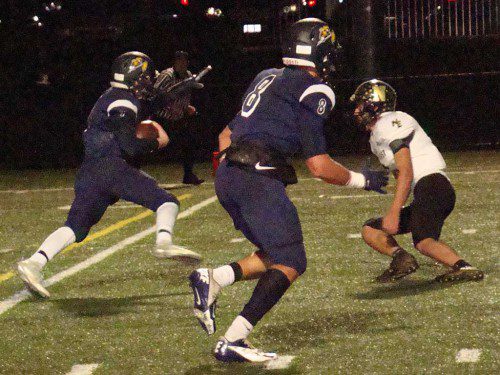 QUARTERBACK Matt Mortellite (at left) knifes through the Northeast defense en route to a 15-yard TD run in the second quarter. Captain Kyle Hawes (8) leads the blocking in the opening round of the D3A playoffs. (Tom Condardo Photo)

LYNNFIELD — They say numbers don’t lie but the ones from the Pioneers’ Friday night playoff opener against Northeast were whoppers big enough to make Pinocchio blush.

The Golden Knights enjoyed wide advantages in first downs (16–4), total yards (302–170), plays (52–21) and time of possession (34:11–9:49), but in the only number that counts – the final score – the Pioneers came out on top 34–14. Despite the bizarre statistics, this one was such a mismatch that Pioneers’ head coach Neal Weidman was able to empty his bench for the entire fourth quarter.

The win advances the Pioneers (now 5–2) into the Division 3A semifinals Friday night where they will take on undefeated St. Mary’s, one of the best teams in Eastern Mass.

The Pioneers didn’t have the ball much but then they didn’t need it much either. They returned a punt for a touchdown and had four scoring drives of less than a minute and a half to build a 20–6 halftime lead and a 34–6 bulge by the end of the third quarter.

Northeast’s game plan was to keep the ball away from the high–powered Pioneers’ offense by milking the clock on every play and pounding the ball with their whirling dervish wing T offense. As the statistics show, the strategy accomplished its goal, but the problem was the Knights couldn’t stop the Pioneers when they finally did get their hands on the ball. Lynnfield only had six possessions but they scored on four of them. 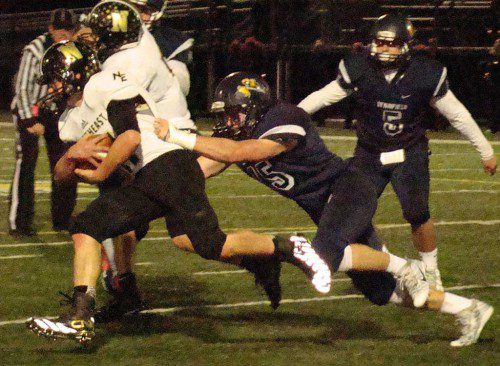 HOLD on there. Pioneer Nathan Drislane (45) grabs Northeast running back Anthony Sousa (11) to hold him to a short gain in Friday’s playoff win. (Tom Condardo Photo)

“I’m sure their game plan was to try and hold on to the ball and they did a good job of it the first half,” said Weidman. “We didn’t give up a lot of big plays but we gave up a lot of first downs and they just hung on to the football.

“They have tough kids,” he went on. “They’re coached to play tough and they do a really good job of what they do offensively.”

The Knights were especially greedy to open the game, running off 19 plays in the first quarter. The Pioneers ran a grand total of none. But they forced Northeast to punt on their first possession and captain Kyle Hawes initially dropped the kick, picked it up at his own 34 and zoomed down the right sideline for a 66-yard score. Liam Fabbri added the first of his four PATs and the Pioneers led 7-0.

Northeast answered on a long drive and a one-yard touchdown by Anthony Sousa. The Pioneers’ defense stopped Scott Peary on the two–point conversion to hold on to a 7–6 lead. The Knights tried an onside kick but captain Alex Boustris recovered on the Lynnfield 42. Five plays later quarterback Matt Mortellite scampered through the Northeast defense for a 15–yard touchdown run to make it 13–6.

The Pioneers got the ball back late in the second quarter and this time it took them only one play to score as Mortellite hit a wide open Nick Kinnon for a 65–yard scoring strike to make it 20–6. It was Mortellite’s 12th TD pass of the season and Kinnon’s fifth touchdown reception of the year.

Special teams were special again early in the third quarter when captain Mike Stellato blocked a punt and the Pioneers recovered on the Northeast 5 yard line. Anthony Murphy plowed in from the 1 to make it 27–6. After another poor Knight punt, Tyler Murphy had runs of 22 and 14 yards, the latter for the touchdown to make it 34–6.

Northeast scored their second touchdown in the fourth against the Pioneers’ backups to account for the 34–14 final.

“We didn’t have to run a lot of plays offensively but we were able to score some points with special teams and when we did have the ball, we made some big plays,” Weidman said.

“It was a good way to start the playoffs,” the coach summed up.