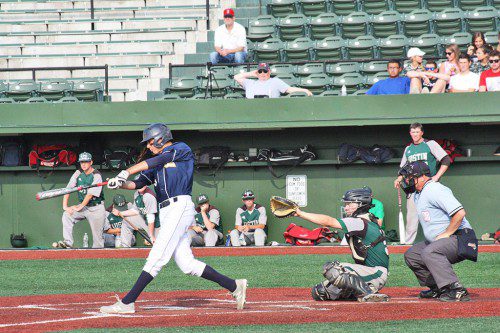 DESIGNATED HITTER Nick Pascucci aims for the fences in the Div. 3 North semifinals against Austin Prep. The senior captain and pitcher was named to the CAL All-League team this season. (Maureen Doherty Photo)

LYNNFIELD —No one ever would have predicted back in mid-March that the 20th seeded team in the Division 3 North baseball bracket would rise up through four rounds of tournament play to take on the No. 1 seeded team.

But that is precisely where the Lynnfield Pioneers found themselves last Wednesday afternoon when they walked onto Lynn’s Fraser Field to take on the Austin Prep Cougars.

The 12-11 Pioneers had worked their way into the North sectional semifinals as one of the final four teams in the MIAA sectionals to face the 19-3 Cougars for a chance to move on to the sectional championship game and possibly advance to the statewide tournament. And they left it all on the field in the 4-3 heartbreaker. 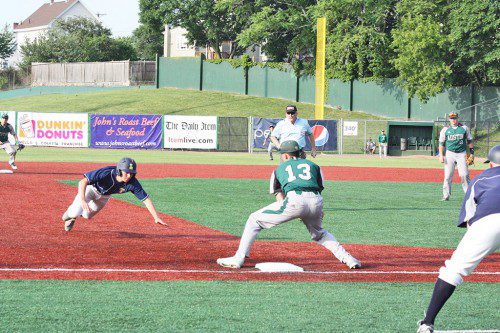 LEAP of faith. Andrew Robins dives head-first toward third base on what was to be the final play of the Pioneers’ 4-3 loss to Austin Prep in the Div. 3 North semifinals. Aggressive base running was a key component of the team’s success this season. (Maureen Doherty Photo)

After a scoreless first inning, the Pioneers drew first blood, scoring all three of their runs in the top of the second inning.

The Pioneers kept the pressure on the Cougars in the bottom half of the inning to maintain their 3-0 lead. Lynnfield then had three up and three down in the third while Austin plated two runs of their own in the third, but still trailed 3-2.

The Pioneers maintained their lead until the bottom of the sixth when the Cougars managed to score two more runs to take a 4-3 lead into the final stanza.

Now it was do or die in the top of the seventh for the Pioneers with at least one run needed to tie it and possibly force an extra inning if they could keep the Cougars from crossing the plate again.

After Nick Theophiles ground out to second, Juliano stepped to the plate and earned a single. Andrew Robins was put in as his pinch runner for Colucci’s at-bat and Robins advanced to second.

Colucci then put the ball in play on a ground out to third for the second out. Eager to get into scoring position to potentially generate the tying run, Robins continued on toward third but was thrown out on a head-first slide into the bag on a perfect throw, ending the game.

After the game, head coach John O’Brien did not question the split-second decision made by his player to aggressively run the bases.

“I think he was trying to make something happen and we never discourage our kids. We try to be aggressive and try to do the right thing. The kid made a great play on the first ball to throw across the diamond, and the throw had to be perfect to get him, and it was. If he doesn’t make that throw we got a guy at third base,” O’Brien said about the gamble taken, adding, “It’s a bang-bang play. I want the kids to be aggressive all the time. We run the bases very well all year so today is no different.”

All in all it was a pretty evenly matched game, with the Pioneers also earning four hits and both teams being charged with three errors.

“I thought we had a shot to really jump out quickly in the first inning to draw blood and we were unable to do that. Eventually we started to get things going, put the ball in play on the pitcher and made some things happen,” O’Brien said.

He said good base running helped his team get those three runs across in the second inning.

“I don’t know if we started swinging at pitches we are not usually swinging at and letting other ones go or we felt complacent. We tried to get a couple of more runs across and play by play they got back into it. It was very well played on both sides,” he said.

He commended his team for how far they’ve come in such a short time. Mindful that their starting lineup includes three sophomores with Bryant Dana in left field, Justin Juliano at shortstop and Michael Stellato at third base, plus four juniors and a senior, this has been the youngest team he has coached at LHS in 15 years, including his 11 years at varsity.

“It just wasn’t our day in the end, but I commend them for the ballgame. …I think we played pretty hard. For a team that was 2-6 to get this far is a credit to these kids and to my assistant coaches. They’ve done a nice job keeping the kids working and getting them to the ballpark and wanting them to come every day and work hard,” O’Brien said.

O’Brien said Colucci “has pitched very well for us. He has gotten stronger all year.”

The difference in this game was Austin’s ability to get “a couple of clutch hits when they needed it and we were unable to get that clutch hit when we needed it,” O’Brien said. “We had a couple of guys on and we had some chances and they made some nice plays on us.”

He said the loss would be especially tough on the team’s three seniors, captain Nick Pascucci as well as Andrew Moorman and Greg Basilesco, whose leadership helped the team to “right the ship after we had a rocky start and keep the kids in it and get them into practicing and working hard. That’s a credit to them and a credit to my assistant coaches,” O’Brien said.

Austin Prep was eliminated by St. Mary’s of Lynn 10-7 in Saturday’s Division 3 North Sectional championship game. St. Mary’s faced East Bridgewater in the state semifinals on Tuesday. The winner of this game will face the winner of the Auburn vs. Mt. Greylock game for the state title at Holy Cross in Worcester on Saturday, June 20.