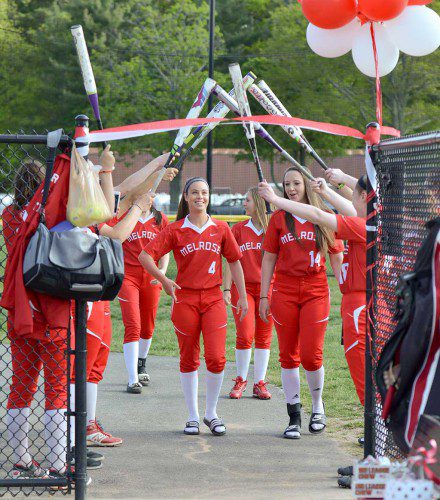 ROLLING OUT the welcome mat. Melrose seniors Ali Bornstein and Alyssa Gorman (pictured) are celebrated on Senior Night along with their fellow seniors Alex McGuire, MacKenzie Marks prior to the team’s victory over Stoneham last Friday night. (Steve Karampalas photo)

MELROSE — The Melrose Lady Raider softball team qualified for post season after a series of wins last week that increased their record to 12-8, including a season finale victory over Malden in Mayors Cup action on Tuesday at Pine Banks. Melrose launched a come-from-behind 6-5 win behind the pitching of Alyssa Gorman and some seventh inning theatrics from batters Peri McDonald, Alex McGuire and Saoirse Connolly.

Malden held a 5-3 lead after Melrose gave up 2 unearned runs prior to the seventh. Fortunately Melrose bats were hot. Josephine Andruszkiewicz reached first on an infield error and Peri MacDonald (3 for 4) knocked her in with a massive triple. Saoirse Connolly (2 for 4) doubled to center and knocked in MacDonald to tie it up, before Alex McGuire (3 for 5) doubled to score Connolly, which gave Melrose the 6-5 edge. A solid 1-2-3 inning in the seventh ended the game and gave Melrose the win.

Prior to the contest, Melrose hosted and beat Stoneham on May 20 at Pine Banks in Melrose by a score of 7-1. Hurler Alex McGuire got the win for the Lady Raiders, who were also celebrating Senior Night, an occasion to celebrate their departing graduates Ali Bornstein, Alex McGuire, Alyssa Gorman and Mackenzie Marks. Fortunately for Melrose coach Steve Wall, the players wanted to celebrate on the field too. Alyssa Gorman broke open a 3-0 game with a bases loaded triple in the sixth, while McGuire held the Spartans to just one unearned run.

Melrose once again qualifies for Div. 2 North playoffs, as they have in several past years, where they will likely face some familiar opponents.

“There are some great teams in the division,” says Melrose head coach Steve Wall. “And we’re familiar with them and they’re familiar with us. That’s both a good and bad thing. But no one is running away with the league at this point. We’ll be competitive for sure.”

In the meantime, Melrose will buckle down in practice and look to possibly scrimmage. MIAA seedings will the released on May 31. Fans are encouraged to visit www.miaa.net for up to date game information.