Published in the September 2, 2015 edition 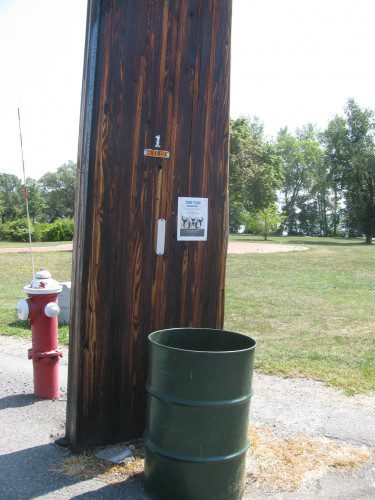 THE TOWN is in the process of pulling together funds from a variety of sources in an effort to accomplish the $485,000 project of burying the wires so two poles like this can be eliminated. (Mark Sardella Photo)

WAKEFIELD — Although a number of factors have delayed plans to remove the oversize utility poles at the head of the Lake and place the wires underground, the project is still very much alive, according to Town Administrator Stephen P. Maio.

The installation of the large wood laminate poles in 2010 was met with surprise and resistance by local citizens who felt that the poles detracted from the newly upgraded parks along the Lakeshore.
Maio said that originally Digital Realty Trust had agreed to foot the entire bill to place underground the wires now on the poles in front of Gertrude Spaulding Park and Col. Connelly Park. The company even planned to expand the project and bury the wires all the way down to their building on Quannapowitt Parkway.
Then DRT’s market crashed and their corporate offices in San Francisco pulled the plug on the project, Maio explained.
So now, the town is in the process of pulling together funds from a variety of sources in an effort to accomplish the $485,000 project of burying the wires so the poles can be eliminated.
Wakefield’s legislative delegation helped secure $100,000 in state funds toward the project, Maio said. The Wakefield Municipal Gas & Light Department, Digital Realty Trust and Friends of Lake Quannapowitt have each pledged pledged some money.
“We’re now about $100,000 short of doing it with no town funds,” Maio said yesterday.
But Maio pointed out that Verizon also has wires on those poles and the communications giant wants to be paid for the costs of putting their wires underground.
“My point,” Maio said, “was why can’t they just do it?”
WMGLD General Manager Peter Dion concurred that getting Verizon to cooperate in getting their wires off existing poles is always a challenge. But Dion said that there would be no direct costs to MGLD ratepayers associated with putting the electrical power cables underground.
“The focus is on trying to raise the money the right way,” Dion said. The idea, he added, was to get the “big customers” to kick in more money.
Maio said that he’s still hopeful that he can get Verizon to pick up the cost of burying their wires. Otherwise, Maio said, there’s the possibility of asking Town Meeting for the remaining approximately $100,000 to get the project done.
Karen Faler of the Friends of Lake Quannapowitt acknowledged that finding a solution has been a slow process but said that she believed that a solution was now close.
“I think it will be successful and that it will happen in a way that’s not burdensome to taxpayers,” she said.
The extra-wide wood laminate utility poles were installed in 2010 to support a second circuit needed by Digital Realty Trust, the large data storage firm that is leasing space at 200 Quannapowitt Parkway.
Dion explained at the time that it was decided to install the new, much larger wood laminate poles because using the old poles or smaller new poles would have required guy wires and cables to support the weight of the additional circuit as the line curves around Col. Connelly Park and into Quannapowitt Parkway.
But the decision to use the larger poles drew criticism from local residents, particularly those who felt that the poles detracted from the upgrades and improvements to the parks at the head of the Lake that had been accomplished through a combination of state funds, private donations and volunteer labor.
Faler said that she was optimistic that by mid to late fall a solution will have come together.
Maio was more optimistic, hoping to have some kind of plan in place by the end of September.
Maio noted that whenever the project gets done, the parks at the head of the Lake will in the end look even better than they did before the giant wood laminate poles were erected. He points out that there were always utility poles of one kind or another along that area.
Once the wires are put underground, he observed, there with be no poles of any kind to obscure the view of the parks and the Lake.