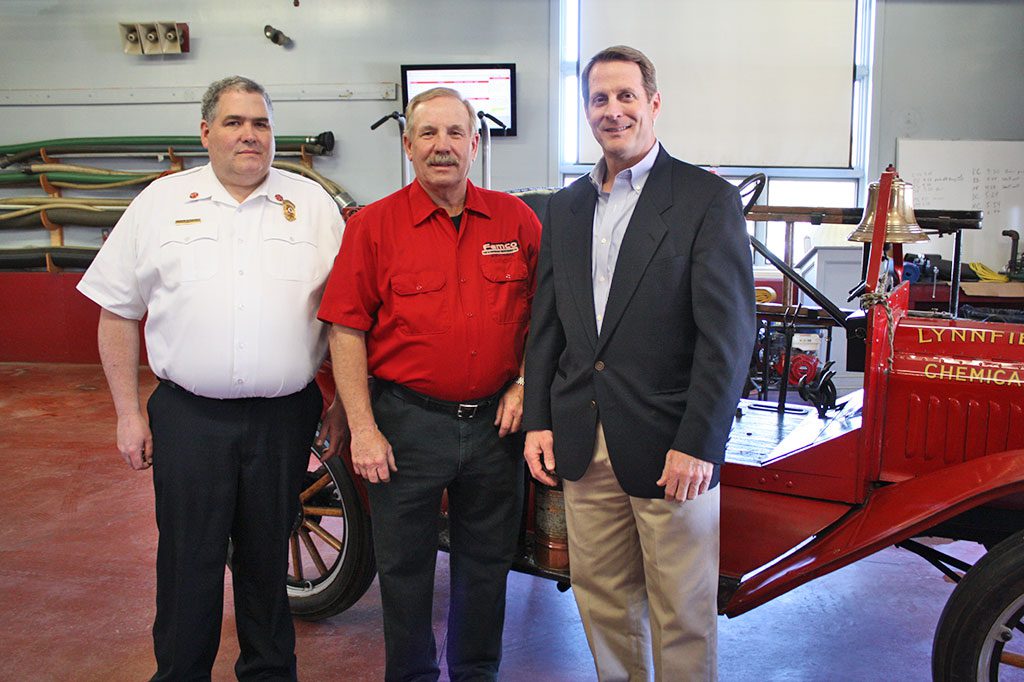 Fire Chief Mark Tetreault said he initially thought Burnham would be donating $1,000 to Chemical 2’s preservation fund. When he found out Burnham was going to donate $10,000 to the fund, Tetreault was absolutely stunned.

“It’s truly amazing,” said Tetreault. “It’s come full circle. The truck was donated to the town and now a donation will help preserve the truck. It really speaks to the spirit of Lynnfield.”

“It’s very much needed,” said Crawford. “It’s been a lifetime labor of love to keep this antique fire truck going. The $10,000 that he generously donated will keep Chemical 2 around for future generations to see.”

“Al is so generous with his donation,” said Mutti.

While working as a firefighter, Burnham spent a great deal of time working to restore Chemical 2. He said Chemical 2 was “the first motorized piece of fire apparatus the town was gifted in 1915.”

Burnham also recalled an urban legend about how Chemical 2 was donated to the town. He said the owner of the Suntaug Inn, which was located at the Bali Hai’s current location, donated Chemical 2 to the town. However, he said the donation caused some controversy.

“The woman wanted to donate some fire apparatus to the town,” said Burnham. “She bought two of these, one to donate to the Center and one to donate to the South. Lynnfield Center decided that because she ran that hotel, which was considered to be some sort of a brothel, they would not take a gift from someone who was running a brothel. South Lynnfield was not proud and took it.”

Crawford also noted, “The donation Al made today is a lot more than what the car cost.”

Burnham said Chemical 2’s chassis was from a Ford Model T. He said American LaFrance used to buy Ford Model T chassis’ and would “turn them into fire trucks.”

“The serial number is F106, which is allegedly one of the oldest pieces of fire apparatus American LaFrance built,” said Burnham.

Crawford said it’s impressive the town owns one of the oldest pieces of fire equipment made by American LaFrance.

“I would love to see this stay in Lynnfield and stay in this condition for many years to come,” said Crawford.

Burnham said Chemical 2 stayed in service until it was retired in 1940. After the fire truck was retired, a number of firefighters from the 1940’s and 1950’s stored it in their barns.

“We resurrected it in 1970 and brought it back into the firehouse,” said Burnham.

Burnham first restored Chemical 2 for the town’s Bicentennial celebration in 1976.

“We worked on it for the better part of a year or so,” said Burnham.

Since Chemical 2 was resurrected, it has been featured at a number of different local events such as the Muster and antique car shows. Mutti and Drew Lyons also drove the fire truck during the Tricentennial Parade last June.

“We are going to rebuild the engine and transmission first,” Mutti added.

Crawford said he is looking forward to seeing Chemical 2 back on the road in the near future.

“It’s something everybody should be proud of,” said Crawford. “It’s something that is close to Al’s heart. I am glad we can keep Chemical 2 going. On behalf of the town, we appreciate it and thank Al very much.”