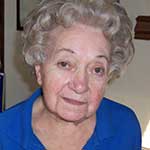 MELROSE — Rose M. (Serino) Storlazzi, 95, a longtime resident of Melrose, passed away peacefully at the Daniels House in Reading on Thursday, Nov. 17.

Rose was born in Revere on April 22, 1921, one of five children of the late Carmine and Angelina Serino. She was raised in Revere before moving to Melrose where she attended from Melrose High School. Growing up during the Depression, Rose became a strong, resilient woman at an early age. She was independent and had an inner toughness that sustained her throughout her 95 years.

Rose was devoted to keeping a healthy lifestyle and practicing nutritious eating habits. True to her Italian heritage, she was known as a great cook with her special lasagna but always included vitamins and additional supplements in her diet.

In her later years, Rose and her late husband Walter shared a love for golfing and enjoyed many rounds walking the fairways of Mount Hood in Melrose together. With her health in mind, it was only after reaching their 80s that they began taking a cart. Mount Hood became their second home during the spring, summer and fall and they enjoyed many friendships through the years playing in the Senior League.

Relatives and friends gathered in honor and remembrance of Rose during visiting hours at the Robinson Funeral Home, 809 Main St., Melrose on Wednesday, Nov. 23, from 9:30 to 10:30 a.m., followed by a funeral service celebrated at 10:30 a.m. Interment in Wyoming Cemetery, Melrose. For online tribute visit RobinsonFuneralHome.com.