Seek to raise funds to play in Zug, Switzerland in June 2015 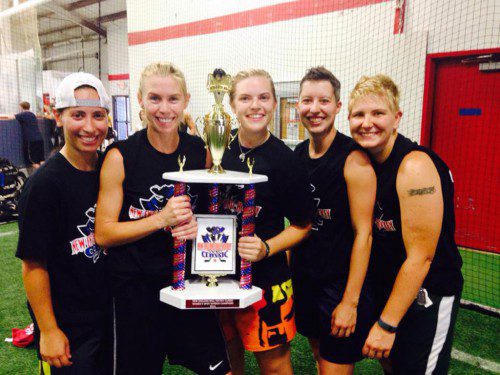 WAKEFIELD residents Samantha Rush (second from left) and Melissa Tetreau (far left) have been chosen to play for the U.S. team in the International Street and Ball Hockey Federation (ISBHF) Women’s World Cup Championship which will held in Zug, Switzerland in June 2015.

WAKEFIELD — Former Warrior girls’ hockey standout, Samantha Rush has been selected to play for the United States in the International Street and Ball Hockey Federaton (ISBHF) Women’s World Cup Championship which will held in Zug, Switzerland in June 2015.

Rush was chosen to play to play for the U.S. along with her wife, Melissa Tetreau, by the American Street Hockey Institutue (ASHI) which selects the players for the U.S.A. women’s ball hockey team which will compete in the ISBHF championships.

The ASHI makes the selections every two years.

Rush also played hockey at Holy Cross and graduated in 2008.

Tetreau also played ice hockey at the collegiate level for Boston University and is a 2010 graduate.

Rush and Tetreau are looking raise some money to help with the travel and tournament expenses. Besides the international travel, they have mandatory training camps and tournaments that come along with their own expenses.

They want to thank everyone in advance for their donation to help them defrays the costs to play the sport they love and represent the U.S.A.

Their GoFundMe page is: https://www.gofundme.com/MelissaTetreau.