Repeats as 500 champ, adds another title in the 200 to highlight WMHS performances in M.L. meet 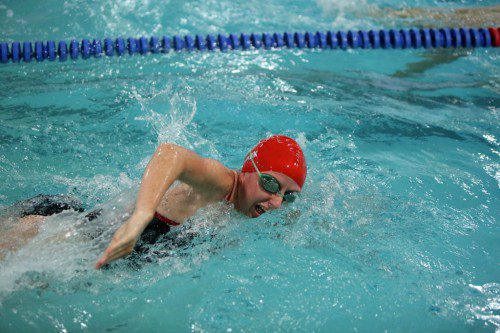 Quirk repeated as the 500 freestyle champion on Wednesday as she posted winning time of 5:12.38. She beat out Winchester freshman Kate Fosburgh who swam a time of 5:25.83.

The senior swam again yesterday at Bentley University and added another title to her resume. Quirk captured first overall as she clocked in at 1:59.37. She beat out Stoneham sophomore Zack McCarville who swam a time of 2:00.79.

Madison Guay, a junior, also competed in the 200 freestyle and earned a fifth place finish at 2:08.79. Guay dropped her time over three seconds. Guay’s time also qualified her for states.

Guay also took ninth overall in the 100 butterfly with a personal best time of 1:06.55. She has qualified for North sectionals and is close to qualifying for the state meet. She will also the opportunity to make the state cut at the sectional meet.

In addition to Quirk scoring points in the 500 freestyle, junior Nicole Pecjo claimed 14th place with a time of 6:05.58.

“Many of the girls had their times drop or did very close to their best,” said Coach Kathy Byrne. “(It was) A very good meet overall.”

In the team scoring, Wakefield finished seventh overall with 150 points.

The Warriors also had some good performances although those swimmers didn’t place among the top 16.

Caroline Sweeney, a freshman, just missed out on the point scoring (the top 16 score points) in the 200 freestyle as she finished in 17th place at 2:15.19.

Wakefield will now gear up for the North Sectional meet which will be held on Sunday, Nov. 9 at 8:30 a.m. at Wellesley College.