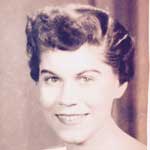 She was predeceased by her husband of 46 years, John D. Curley.

She is survived by her six children: Maureen L. Curley of Gainesville, Fla., John D. Curley and his wife Ann of Orange Park, Fla., Margaret C. Talbot and her husband Brian of Lancaster, Pa., Marianne C. Kramer and her husband Mark of Brookline, Barry L. Curley of Jacksonville Beach, Fla. and Edmund F. Curley and his wife Dolores of Ipswich. In addition, Ruth leaves her daughter-in-law Sue Ellin Martin of Ponte Vedra, Fla. and six cherished grandchildren, whom she loved so dearly, Kathleen Kramer of Boston, Michael Kramer of Medford, Kelly Kramer of Brookline, Melanie and Christopher Curley of Ponte Vedra, Fla. and Brian Curley of Ipswich.

Ruth and John retired to St. Augustine, Fla, after having raised their six children in Wakefield and Rockport.

Wherever they lived, their children always found them and together they created many happy memories for their family and friends. Ruth’s devotion to her family was unsurpassed; her love of family, food and friends will be sorely missed by those whose lives she touched.

A funeral Mass will be celebrated in St. Joseph Church, 173 Albion St., Wakefield on Wednesday at 10 o’clock. Relatives and friends are invited to attend. Interment will follow at St. Patrick Cemetery in Stoneham.