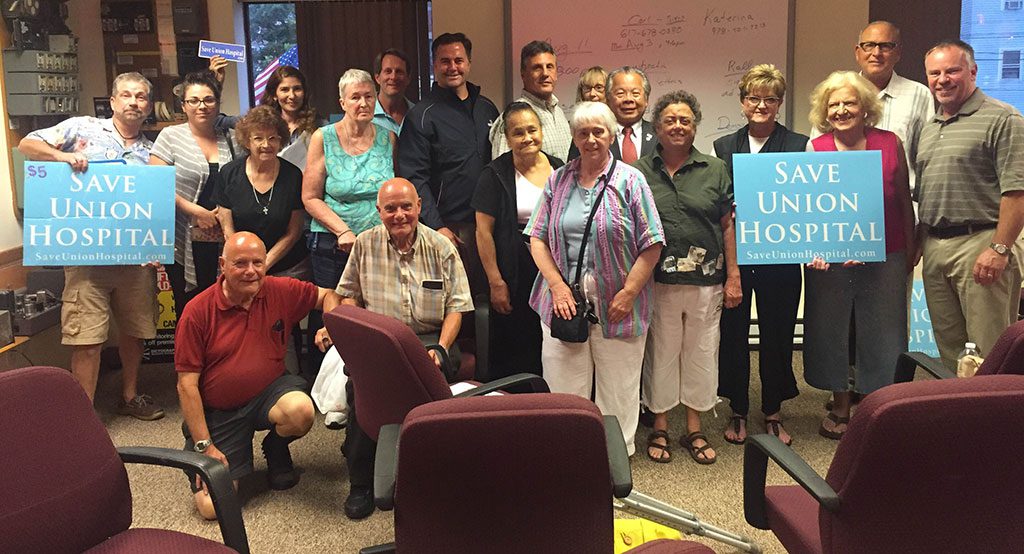 SELECTMEN Phil Crawford and Chris Barrett (back row, center) stand with area officials during a Save Union Hospital meeting held at Wayne Alarm Systems in Lynn. Barrett said he was proud to join area elected officials to lend his support to save Union Hospital. Selectmen Chairman Crawford read a strong letter sent by the selectmen to Partners Health Care opposing the closure of Union Hospital. (Courtesy Photo)

LYNNFIELD — The recent announcement by Partners Health Care to shutter Union Hospital in Lynn has prompted the selectmen to officially protest that decision in a letter to Partners that will also be sent to a variety of state officials.

Written by Selectmen Chairman Phil Crawford, it was unanimously endorsed by Selectmen Tom Terranova and Chris Barrett as well as Crawford at their meeting on July 13.

Crawford noted that the board went on record last year to support the advocates who were fighting to keep Union Hospital open. Although the make-up of the board has changed in the past year, he noted that that Barrett, their newest member, has also gone on record in favor of saving the hospital.

Crawford said that he has not heard of anyone who is in favor of this closure. “Everyone is on the same page,” he said.

The letter cites the “valuable and needed service” provided by the hospital to Lynnfield as well as the entire North Shore. It states that Partners’ plans to “move the inpatient beds to Salem Hospital and close the emergency room after three years with movement of the emergency room to Salem at that time puts the health and well-being of the residents of Lynnfield at significant risk.”

Since half of all emergency 911 transports from Lynnfield are sent to Union Hospital, the letter states that the “closure of the Union emergency room will increase transport times to emergency room care for residents of Lynnfield, putting their health and well-being at significant risk.”

Additionally, the letter stated that transferring 50 percent of the town’s emergency room calls to other facilities “will only lead to the overburdening of emergency rooms at other area hospitals, increasing wait times and treatment times for our residents. This is unacceptable. At a minimum, Union Hospital must retain an emergency room presence in Lynn. This simple fact could be the difference between someone in Lynnfield living or dying.”

The non-emergency ambulance transport rate from Lynnfield to Union Hospital is even higher, with over 60 percent of such transports sent there. Diverting such calls to other area hospitals will “increase the amount of the time our ambulance will be tied up on a call,” the letter states.

This fact will also increase the expense to the town, since the ambulance will be officially out of service for longer periods of times negotiating traffic, which will force the town to pay for personnel to cover the station. Currently, ambulance transports to Union Hospital are so close that the ambulance is considered to be “in service,” therefore, additional personnel are not called in.

Fire Chief Mark Tetreault noted that Partners Health Care has stated it would take “up to three years” to close the emergency room at Union Hospital, which means its closure “could be sooner.”

Resident Pat Campbell of Patrice Lane, who has long advocated keeping Union Hospital open, recommended that a copy of Crawford’s letter also be sent to Attorney General Maura Healey with a request to seek an investigation into it.

Campbell also suggested that it be sent to the commissioner of the state Department of Public Health as well as the Mayor of Lynn and the Lynn City Council. She asked the selectmen to attend an advocacy meeting held last Wednesday night of supporters for keeping the hospital open.

Town Administrator Jim Boudreau said a copy of the letter would also be sent to the town’s legislative delegation. But he explained that there is a process Partners must go through with the state Attorney General to close a hospital.

Boudreau added a “cautionary note” that fighting the closure would be an uphill battle. “Steward Hospital did close Quincy Hospital,” Boudreau said, noting that Quincy is a city similar in size to Lynn.

As a resident of South Lynnfield, Barrett said he hears the ambulances traveling to Union Hospital quite often. Closure of the hospital also opens up a host of additional questions about what would happen to that site and how its future use would affect traffic in this overburdened area.

Barrett said they need to stress to the town’s state legislative delegation as well as to Gov. Charlie Baker, who is a native of Swampscott, of the importance of keeping Union Hospital open. Barrett added that closing Union Hospital is “a big blow to the city of Lynn.”