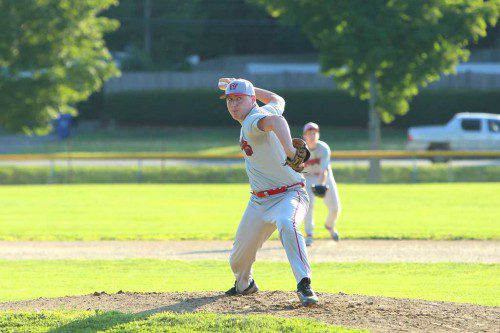 “Adam does pretty well. He throws the ball hard (and) has been working on some other pitches, which is good for him because he’ll be a senior on the high school team. So that’ll be good for him,” said Wakefield coach Peter Beck.

It was Lexington/Bedford which managed to get on the scoreboard first in the top of the third inning.

Matt Pinkham led off and hit a slow grounder to the right side. Chanley dove for the ball, and though it was unlikely he would got Pinkham, he attempted the throw to first from his knees and the throw went past first baseman John Evangelista. After a strikeout, Alex Ferrari reached on an error and then Connor Green waked to load the bases. Yaku Ebihara hit a ball to right fielder Matt Smith who was able to throw to first for a force on Ebihara, but Pinkham scored to make it 1-0 in Lexington-Bedford’s favor.

Wakefield managed to tie the game up in the bottom of the fourth. Anthony Cecere led off and reached on an error and then Tighe Beck grounded to second baseman Ebihara whose throw to second for a force was off the mark to leave both runners safe. Evangelista attempted to bunt his way on but the ball was fielded by first baseman Josh Soldan, who tried to throw to third for a force on Cecere. But his throw was high for the third straight error to put the bases loaded.

After two strikeouts, Lexington/Bedford catcher Green had a passed ball that allowed Cecere to score to make it 1-1 before a ground out to the mound ended the inning.

Lexington/Bedford got the go-ahead runs in the top of the sixth inning. Green led off with a single to left and then stole second. Ebihara dropped down a bunt but second baseman Chris Dettorre was late covering the bag and couldn’t handle Chanley’s throw. Soldan doubled to left to score both runners to put Lexington.Bedford up 3-1, where it would stand. After the two-run double, Chanley struck out the final six batters he faced.

“We’ve played better. We’ve played probably 10 out of the last 12 days, so I’m tired just coming down here coaching so they’re probably pretty beat. Some of these guys are playing on the younger Townies team. So, some of them haven’t had a day off in a week and a half. Some of that’s to be expected, just being tired,” said coach Beck.

The Townies, after losing to Cambridge by an 11-2 score on Wednesday, fell to 8-6 on the season in the Middlesex Senior Babe Ruth Standings in the North division.

Wakefield plays again tonight and tomorrow as its busy schedule continues. The Townies face the Malden Bambinos tonight at 8 p.m. at Pine Banks before returning home to take on Woburn tomorrow night at 5:45 p.m. at Walsh Field.