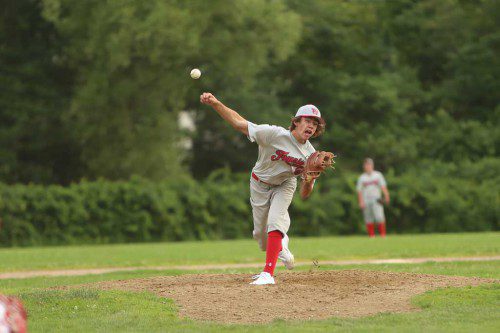 ARLINGTON — The Wakefield Townies of the Middlesex Senior Babe Ruth League made it three in a row with an 8-0 victory last night over the Arlington Pond Rats at Summer St. Field in Arlington.

Offensively, Wakefield banged out 15 hits with three hits apiece for Evangelista (one run, one RBI) and Anthony Cecere (one run, two RBIs, triple). Evangelista and Cecere led the Townies’ attack.

Kevin Murray (one run, one RBI), Zach Thomas (two runs, two RBIs) and Dave Holman (one run) added two hits each, while Chris Dettorre and Chanley had a hit and RBI apiece.

Wakefield increased its record to 8-4 and is in a tie for second place with Reading in the North Division of the Middlesex Senior Babe Ruth League.

The Townies take on Cambridge tomorrow night at 7:30 p.m. at St. Peter’s Field in Cambridge. The Townies will be the home team for the game since the contest was moved there due to a lack of an available field in Wakefield.