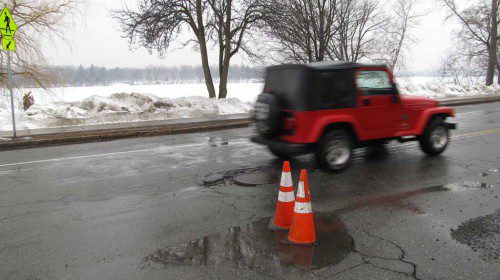 SOME potholes in town have been reported to the Department of Public Works. Traffic cones are then placed over reported potholes to alert drivers to avoid them. (Gail Lowe Photo)

WAKEFIELD — All of New England will celebrate the arrival of spring tomorrow.

After a difficult winter that included 114 inches of snow locally, as well as collapsed roofs and decks and impossible commutes around the region, people have been looking forward to milder temperatures, perennial flowers and fewer layers of clothing.

Like everyone else, Wakefield’s Department of Public Works Director Richard Stinson has been looking forward to spring, as it brings to an end the need for plowing, salting and sanding roadways, righting fallen signs, making overtime payments to his crews and hiring private contractors.

But just as Stinson closes the books on these line items, he is faced with new responsibilities — including fixing potholes that have developed over the winter months. They are now rearing their deep and ugly heads and causing problems throughout town.

“We respectfully and urgently ask you and your colleagues in the General Court to approve this legislation by April 1 so cities and towns can access vital funds in time for the beginning of the spring construction season,” Beckwith wrote.

Combined with the $100 million the Governor released in January, which would not have been possible without the Legislature’s leadership, House Bill 3187 would ensure a total of $300 million in new Chapter funds for cities and towns to use to repave and maintain local roads during the 2015 spring-to-fall construction season, Beckwith said.

As he did last year around this time, Stinson is hoping the town will get a significant cut of the funding.

“I hope we get the money sooner rather than later,” said Stinson. “Receiving the money late in the season is no good because everyone will be scrambling for paving crews. The timing is as important as getting the money.”

Before the state distributes any money to towns and cities, Stinson explained that the state has to give its approval of House Bill 3187. Once this happens, the Legislature then must pass the Bill. If funding is approved, the Massachusetts Department of Transportation also must give its approval.

Wakefield has 105 miles of roadways, 90 of which are open to the public, Stinson said.

“These 90 miles are eligible for paving,” he said. “We have had insufficient funding for the past 20 years, so to keep up with a paving and repair program, we need to work on about six miles a year.”

Stinson said he hopes to begin roadway repair work in June. The first section DPW workers will tackle is North Avenue, beginning in the area of Rte. 128, all the way to Church Street.

“There’s a lot of preliminary work to be done that will take between 30 and 45 days to complete,” said Stinson. “We hope to begin that work in May.”

While Stinson is waiting to hear about funding, Wakefield Police Lt. Craig Calabrese said that potholes are a menace to drivers and often cause accidents.

“When a driver sees a pothole the natural reaction is to swerve but doing so often comes with crossing the center line, which can cause an accident,” said Calabrese.

The Police Department also gets calls about blown tires. Just this week, a driver reported that his vehicle went into a pothole that flattened two tires.

“Drivers need to slow down until all the potholes are repaired,” said Calabrese. “Driving at slower speeds gives greater reaction time.”

Calabrese said that Department of Public Works crews have worked tirelessly all winter to keep ahead of pothole work but there is still work to be done.

“We really appreciate the efforts of the DPW,” he said.