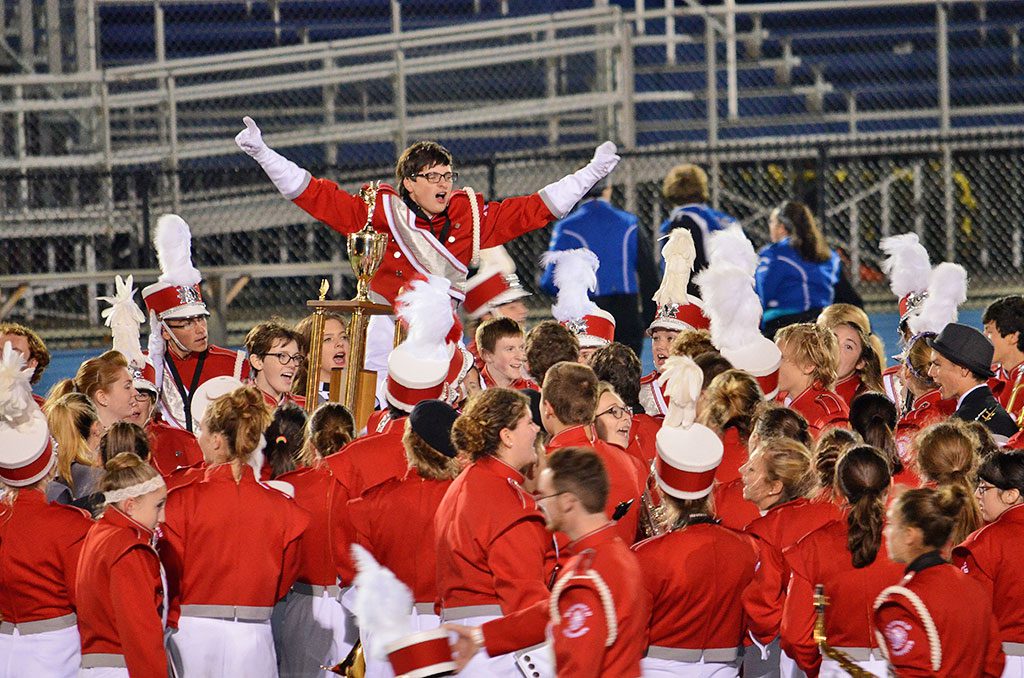 LAWRENCE — This past Sunday, the Wakefield Warrior Marching Band’s performance of “Double Agent” won a gold medal at the New England Marching Band Championships, finishing third in Division 5 with a score of 94.5, only a half point shy of platinum.
Thirty-five bands from as far away as Westbrook, Maine and East Cranston, R.I. participated in the finals, held at Memorial Stadium in Lawrence.
Eight bands competed within Division 5, and Wakefield easily topped their regional rivals, Portsmouth, N.H. (93.1) and Stoughton (92.7). Only Blackstone-Millville Regional and Dartmouth scored higher, with 98.0 and 96.9 earning them each platinum. The marching band does not typically get to see either of these bands perform until finals, because they are not in Wakefield’s region.
This is only the second year that Wakefield has been a D5 band, so the successful season the staff and students have worked so hard to create has been especially satisfying.
Band Director Thomas Bankert was also recognized for his years of NESBA successes. Every 10 years, when rotating trophies are retired, a band director whose band has won a few times receives the trophy to keep.
Bankert’s trophy stands about four feet tall, making it visible in the stands when it was held aloft during the mid-field celebration following the awards ceremony.
“What a season!” exclaimed Bankert. “I am so proud of all the kids and all the support from parents, family and friends at finals on Sunday. The kids performed their best show of the season and it was such a pleasure to stand back and watch them on Sunday night.”
The band will be performing at half time this Friday evening, Nov. 6, during Wakefield’s playoff game against Arlington High School at Landrigan Field.