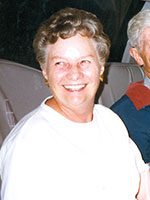 Born in Beauvais, France on Dec. 13, 1924, she was the daughter of the late Eugene and Marie (Everard) Dizambourg.

Mrs. Whitney was raised in France before moving to the United States in 1946. She had been a longtime Lynnfield resident and was a member of the Centre Congregational Church in town. Mrs. Whitney had served as a Den Mother in the Cub Scouts of America.

She was the beloved wife of the late William F. Whitney. She was the loving mother of James W. Whitney and his wife Catherine of Hudson, N.H., and Mariane B. Newton and her husband Richard of Naples, Fla. She was the loving grandmother of Sheila, Megan and Kirsten; and the great-grandmother of Amanda, Robert, Nicholas, Dominic and Samantha. She is also survived by many nieces and nephews in France and the United States.

Her funeral service was held at the McDonald Funeral Home, 19 Yale Ave., Wakefield on Monday, Oct. 19 followed by interment at Puritan Lawn Memorial Park in Peabody. Visitation for relatives and friends was held prior to the service.