The Butler does in the Warrior softball team in Div. 2 North upset bid 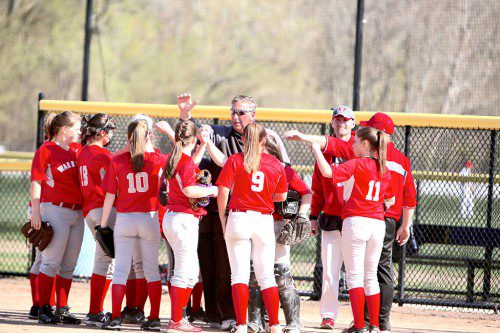 THE WMHS softball team played a terrific Div. 2 North first round game against top-seeded Tewksbury yesterday afternoon at Memorial Field. The Warriors came up short by a 3-2 score in eight innings to have their season come to an end. (Donna Larsson File Photo)

TEWKSBURY — One of the oldest cliches in whodunit stories is that the butler did it.

The Wakefield Memorial High softball team can claim the same thing in its bid for an upset of top-seeded Tewksbury in the Div. 2 North tournament.

Nora Butler’s single to left field in the eighth inning drove in the winning run as the Warriors came up short in a 3-2 first round contest yesterday afternoon at Memorial Field on Livingston Street.

Wakefield held a 2-1 lead when Tewksbury (18-3) tied the game in the last of the seventh on an illegal pitch which brought in the tying run from third base. That send the contest into the extra frame.

The Warriors went in order in the eighth but Tewksbury rallied with two outs in the last of the eighth inning to end Wakefield’s season.

After two were retired, pitcher Adrianna Favreau helped her own cause with a triple to center field. After Teagan Trant was hit by a pitch to put runners at the corners, Butler (2-for-3, a run scored and two RBIs) crushed a base hit to left field as Favreau crossed the plate.

“We played the number one seed and it went eight innings,” said Coach Rick Quattrocchi. “Little Purcell (Julia Purcell) pitched a heck of a game. That Tewksbury team can rake. I’m so proud of my team. They played their best game of the season.”

Purcell, a sophomore, pitched seven and two-thirds innings giving up three runs on seven hits. The right-hander struck out four batters and walked two. Purcell gave up just one run over six innings and was involved in quite a pitchers’ duel with Favreau.

Favreau, a junior right-hander, went all eight innings for the Redmen giving up two runs (one earned) on six hits while striking out eight and walking two.

Leading the way at the plate for the Warriors (11-11) was Hannah Dziadyk, a sophomore, as she collected two hits and scored a run. Meghan Burnett, Meagan Gibbons, Olivia Dziadyk and Purcell had the other five hits. Burnett’s hit was a double.

Burnett, a sophomore, led off the game reaching base on a strikeout, dropped ball and an errant throw by catcher Kayla VonKahle. Vanessa Kaddaras, a sophomore, laid down a sacrifice bunt to move Burnett up to second base. But Favreau came back with two more strikeouts to end the top of the first inning.

Olivia Dziadyk, a sophomore, drew a two out walk in the second inning and Burnett doubled to right field in the third inning. But both times the runners were left stranded.

That changed in the fourth inning, however, when the Warriors plated both of their runs to take a 2-0 lead.

Hannah Dziadyk led off with a base hit to right field. After a strikeout, Gibbons reached safely on a bunt single. Olivia Dziadyk singled to shallow left field to load the bases. Purcell stepped to the plate and laced a base hit to center field to score Hannah Dziadyk. When the ball was misplayed by center fielder Marissa Doherty, Gibbons came around and scored as well.

Wakefield had runners on second and third with one out but was unable to cash in with any more runs. Catcher Nicole Catino tapped a grounder to shortstop and was thrown out at first base. Olivia Dziadyk waited at third until the throw was released and took off for home. But Dziadyk was thrown out at plate in an inning ending 6-3-2 double play.

Tewksbury, meanwhile, had just one base runner over the first three innings as it went in order in the first two frames and Francessa Cocca singled past second base with two outs in the third and stole second base. But a line drive back to Purcell ended the threat.

The Redmen cut Wakefield’s lead in half in the last of the fourth inning.

Kristen Dick, a senior, reached on an infield hit to second base. Favreau was hit by a pitch and both runners moved up to second and third on a wild pitch. Butler then lifted a sacrifice fly ball to center which Burnett made a nice diving catch on for the out. Dick tagged up and scored on the play to cut the lead to 2-1.

The Warriors went in order in the fifth inning. In the sixth inning, Hannah Dziadyk singled to center field. But Emma Hickey lined out to Dick at third base who had come in closer to the plate for the bunt attempt. Dick fired to first to double off Dziadyk which resulted in just the minimum three batters facing Favreau. Pinch-hitter Julia Guanci drew a two out walk in the top of the seventh but was left stranded as Wakefield held just the one run lead headed into the last of the seventh.

Tewksbury went in order in the fifth and Dick had one out double in the sixth inning. But it was the seventh inning in which the Redmen rallied to tie the game at 2-2.

Butler singled to left-center field and advanced all the way to third base on a sac-bunt by Erika Whynot. After a pop up to third base for the second out, Wakefield was just an out away from the upset. That’s when disaster struck as Purcell was called for an illegal pitch which resulted in a ball to the batter, VonKahle and brought in Butler with the tying run.

The Wakefield coaches protested the call, but Coach Q admitted later that the call was the correct one. It probably wouldn’t have mattered as VonKahle blooped a singe to right field which would have scored the run anyway. A line drive back to Purcell ended regulation as the two teams headed to the extra frame.

“We have three juniors, 11 sophomores and three freshmen,” said Coach Q. “We played the top seed and took them to eight innings in a 3-2 game. We just tipped our hats to them. I think we outplayed them but they got the win.”