Two unhurt after car crushed by tree during microburst 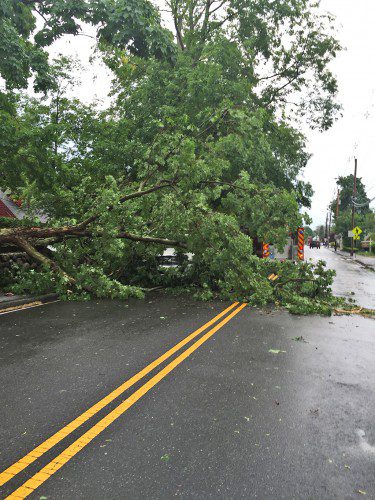 THE TWO occupants of this vehicle on Salem Street were lucky to escape unharmed after a tree and live wires fell on top of it during a suspected microburst May 28. (Fire Department Photo)

LYNNFIELD — A severe thunderstorm or possibly a microburst tore through a small portion of South Lynnfield last Thursday evening.

Fire Chief Mark Tetreault said the Fire Department responded to eight emergency calls within a short period of time in an area centered around Salem Street and Route 1.

The most serious incident, reported at 6:11 p.m., involved a tree that had fallen on top of a vehicle on Salem Street, trapping the two occupants inside. Police, fire and ambulance crews were all dispatched to the scene.

“Upon arrival it was determined that a live power line was also involved and was hanging just a few inches from the roof of the vehicle,” Tetreault said.

However, firefighters ultimately determined that it was safe for the occupants to exit the vehicle, Tetreault said. “The doors of the car were able to be opened from the outside of the car. The occupants were very fortunate not to have sustained any injuries, but the car sustained some damage and was towed from the site,” he said.

Salem Street also remained closed for approximately one hour while crews from the Department of Public Works and the Peabody Municipal Light Department cleared the hazard.