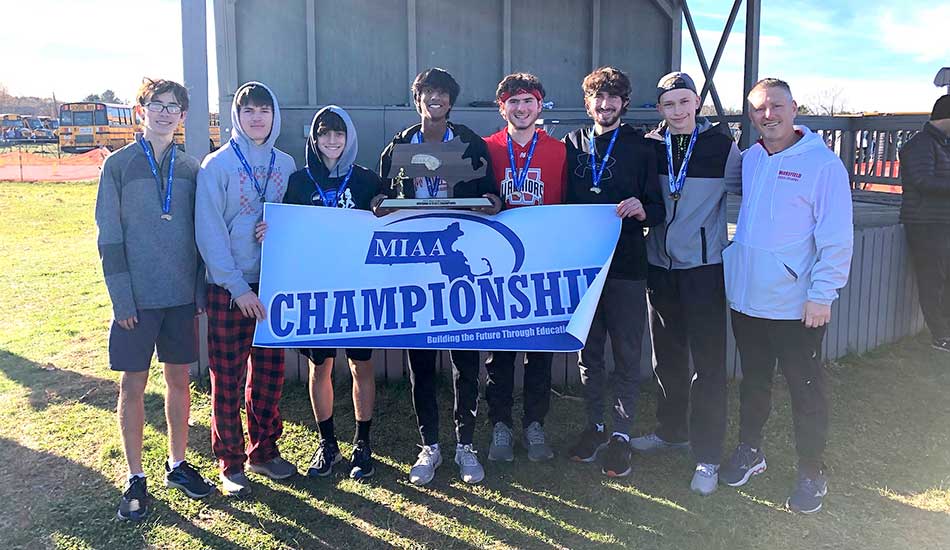 Warrior XC wins it all for first time since 1972

WRENTHAM — The last time Wakefield High brought home an All State title in cross country was 49 years ago in 1972.

That drought came to an end on Saturday when the 2021 Wakefield Warrior boys’ team took home the crown in the MIAA Division 2 All State Championship held at the Wrentham Developmental Center.

They did it by placing all five scorers in the top 43 out of 190 runners and finished with a total of 99 points.

The Warriors had to beat 22 other teams that qualified from last weeks’ State Divisional Championship. They also had to beat Burlington who had a strong win last weekend over the Warriors.

Burlington was 2nd with 126 points and was followed by Newburyport, Danvers, Melrose, Longmeadow, Northampton, Nashoba, Martha’s Vineyard and Amherst-Pelham who all rounded out the top 10 teams. Lowest score wins as the score is calculated from where the top five of each team finishes.

Junior Leith Jones was fantastic as the Warriors’ top finisher for the first time, placing 7th overall in a personal best time of 16:07. Jones started out a bit further back coming through the mile, working his way up to the top 10 by the two mile mark and passing a few more over the last mile.

Senior captain Ajay Haridasse also bounced back from a hard race last week to finish 20th in a time of 16:28 despite being seeded 40th coming into the meet.

Junior Ben Stratton also improved on his seeding by placing 25th in a personal best of 16:38.

Senior captain Thomas Dowd ran one of his best races of the season with a time of 16:51 and placed 43rd to round out the scoring.

Sophomore Michael Arria was caught far back early in the race and had to maneuver a lot of traffic to recover and finish 78th in a time of 17:15. Fellow Sophomore William Mezikofsky also ran a solid race, passing many runners over the second half of the race to finish 128th in a time of 17:55.

“This group of young men should be very proud of themselves,” said head coach Perry Pappas. “They figured out what it took to become champions. I know I couldn’t be prouder. They worked tremendously hard and remained focused for a very long time. A different end result wouldn’t have taken away from that. But, it’s a great feeling to see their efforts rewarded in a big way.

“So many thanks go to the people who contributed to this accomplishment over the years including alumni, parents and other supporters. It was special seeing so many of them at the meet on Saturday.”

Next up, the Warriors will head to New York to compete in the Nike Regional Northeast Championship this Saturday, Nov. 27 at Bowdoin Park in Wappingers Falls.