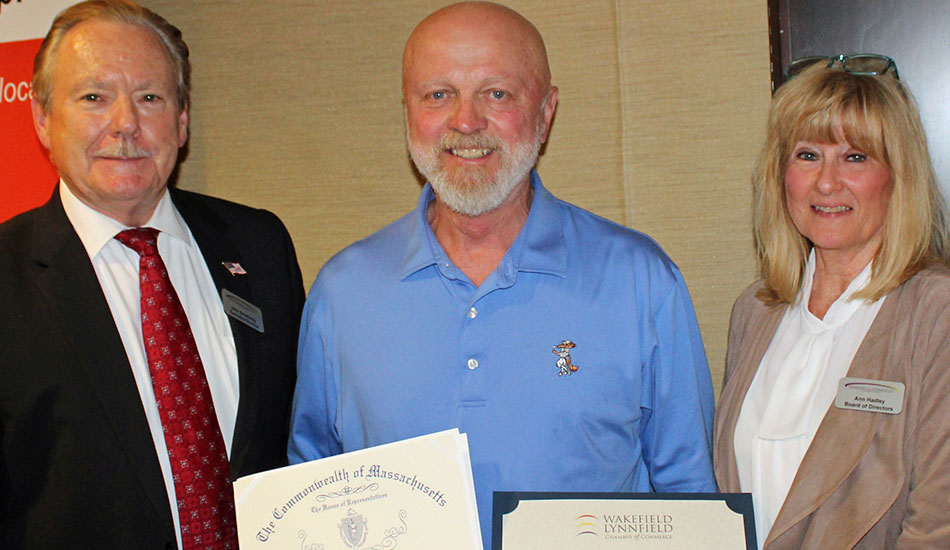 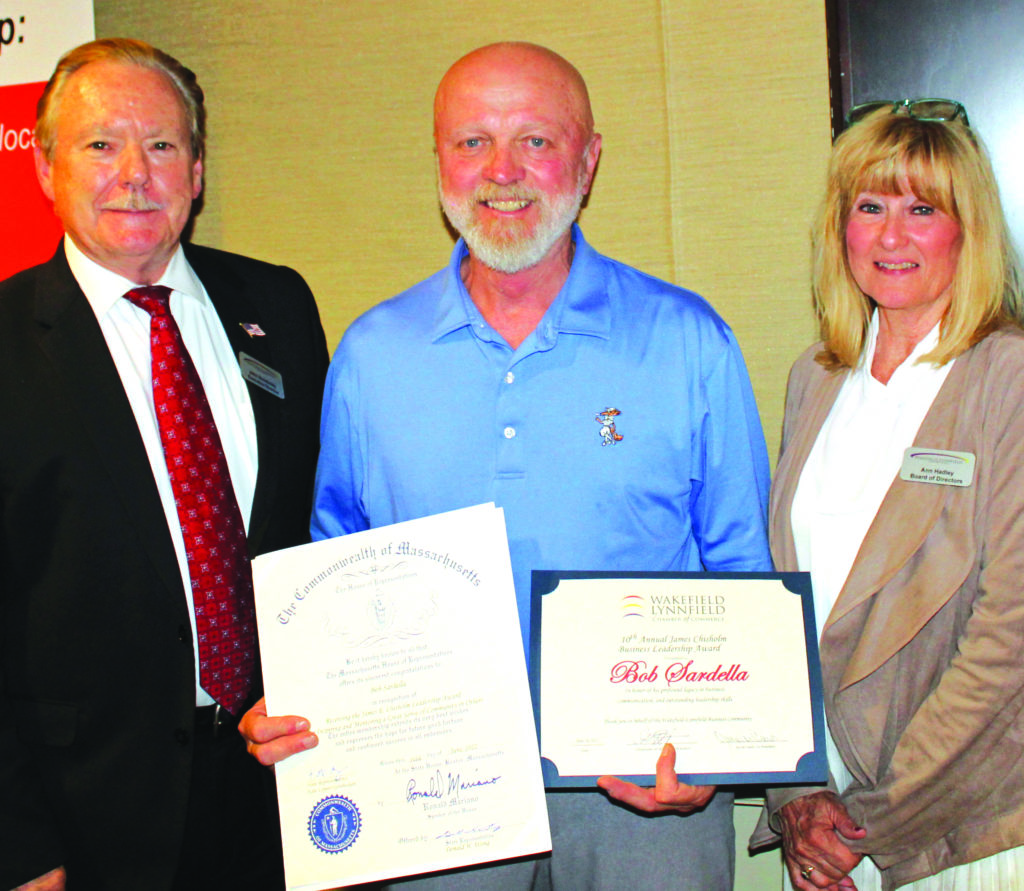 BOB SARDELLA, (center) owner of Sardella Sign and Display on North Avenue, received the James Chisholm Business Leadership Award at the Wakefield-Lynnfield Chamber of Commerce meeting last week. He was also recognized for his 50 years in business. Chamber board member Ann Hadley of JC Marketing Associates made the presentation along with Executive Director John Smolinsky. (Mark Sardella Photo)

WAKEFIELD — Local businessman Bob Sardella was a dual honoree at last week’s Wakefield-Lynnfield Chamber of Commerce Annual Meeting and Banquet. In addition to being honored for 50 years in business as Sardella Sign & Display, he received the Chamber’s most prestigious award, The James Chisholm Business Leadership Award.

The award was presented by Jim Chisholm’s daughter, Ann Hadley, president of JC Marketing Associates, the firm her late father founded 58 years ago.

“This annual award is presented to a business leader who exemplifies the spirit of Jim’s generosity, guidance and support of local business organizations and community,” Hadley said.

“According to the criteria, this award is presented to a modest leader who gives all to the community, someone who is a motivator, inspires great community vitality and is a mentor to others,” Hadley added.

She noted that Sardella had a personal connection to her father.

“While in High school, this young man would go to my father’s office after school and learn about the advertising/marketing business hands-on,” Hadley recalled. “My father did not have to teach him creativity. He already had that.”

The bond continued throughout the years, Hadley noted.

“A few days before my father’s unexpected passing, he called to congratulate this man this on the 40th anniversary of his business. Ten years later as he celebrates his 50th anniversary, Jim would be pleased that this man, Bob Sardella, is receiving this award and he continues to be successful as my father knew he would be.”

Hadley noted that Sardella grew up in Greenwood and was considered “Class Artist” from junior high until he graduated from Wakefield Memorial High School in 1972. He went on to graduate from the New England School of Art & Design.

Sardella started making signs professionally while in high school using his parents’ garage as a shop, Hadley noted, moving to a series of new locations around town as his business grew.

“Bob has always been a great supporter of the Chamber and served as a Chamber director and officer, Hadley noted. “He has helped the community in many ways – always stepping up when asked to help, and donating his time and talents for the good of the community.

“During COVID, he initiated, along with Chamber, signs thanking first responders,” Hadley said. “Bob has made the sponsorship banners for the July 4th Parade for many years, as well as work for local Youth and high school sports teams. The list goes on….

“Most recently,” Hadley added, “Bob has branched out with another highly successful venture, making cornhole boards as “Bob’s Cornhole Company.”

Sardella expressed his appreciation for the Chamber’s recognition.

“I am humbled and honored to have been recognized at The Wakefield Lynnfield Chamber of Commerce Annual Dinner.” he said. “Being the recipient of the James Chisholm Award made the 50 years even more special. Jim mentored me through my youth and I still practice his business wisdom every day.”

The Chamber also handed out a number of other recognitions at last week’s Annual Meeting and Dinner.

The New Business award was given to Charlie’s on Main Pizza. The “Super—duper Chamber Member” award went to HawkVisuals.

The keynote speaker at the Chamber’s Annual Meeting and Dinner was Commander Billie Farrell, the first woman to captain the USS Constitution in the historic warship’s nearly 225-year history.

Farrell talked about her naval career, beginning with her initial assignment aboard the USS Vella Gulf, first as electrical officer and then as navigator. She was then assigned to Millington, Tennessee before reporting to the USS San Jacinto as weapons officer and then combat systems officer. Following her return to the US Naval Academy as the deputy director for professional development, Farrell was assigned to the Commander, Naval Surface Force Atlantic until 2020. After a stint as the executive officer of the USS Vicksburg, on Jan. 21, 2022, Commander Farrell was assigned to USS Constitution for a two-year assignment as the ship’s first woman commanding officer.

She also talked about the history of the Navy and “Old Ironsides” in particular, noting that the ship will celebrate it’s 225th anniversary later this year. She noted that about 3,000 people visit the ship each day.

The Constitution, she noted, was one of six frigates that President George Washington commissioned in 1794. The ship was built in Boston, across the harbor from where she sits today.

“I’m always amazed that the one left standing is the USS Constitution,” Farrell said. “It’s truly an honor to serve as her commanding officer and a privilege every day to tell her story and the story of the Navy.”