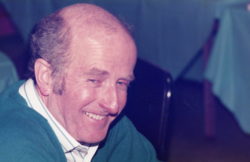 A proud veteran of the United States Navy

Mr. Quinn was raised in Wakefield and was a graduate of Wakefield High School, Class of 1955. He was a proud veteran of the United States Navy. Mr. Quinn was a retired electrician from General Electric of Lynn.

His funeral service will be held in the McDonald Funeral Home, 19 Yale Ave., Wakefield on Tuesday, June 21 at 11 a.m. Visitation will be held prior to the service beginning at 10 a.m. Interment with Military Honors to follow at Lakeside Cemetery, Wakefield. In lieu of flowers, contributions may be made to the charity of one’s choice.